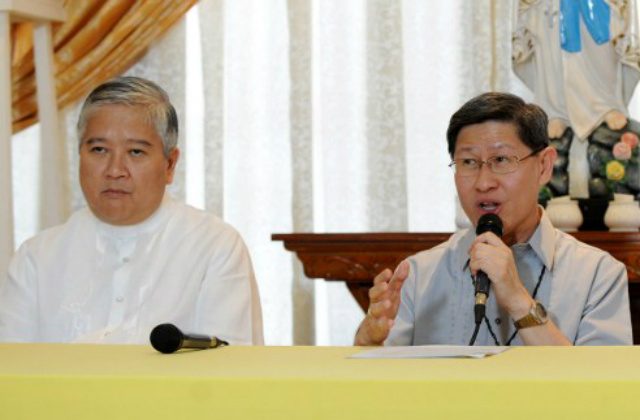 Both Manila Archbishop Luis Antonio Cardinal Tagle and Lingayen-Dagupan Archbishop Socrates Villegas denounced the plan to revive the death penalty as pushed by President Rodrigo Duterte and his allies in Congress.

In an Advent recollection on Sunday, December 11, Tagle condemned killing people as “an act of hopelessness and despair.”

“A people that has hope will never kill,” Tagle said at the event organized by Jesuit Communications on Sunday.

(Hope tells us that while your life might be broken, while you might have made a mistake, we continue to hope that there is new life. There is hope. And when you’re asked, do you see it? I do not see it yet, but I will continue to hope.)

Tagle earlier released a prayer against the death penalty, meant to be said in Masses throughout the Christmas season. The prayer described the capital punishment as “state-sanctioned death,” and criticized “the illusion that one must take life in order to defend it.”

Tagle’s remarks come as lawmakers at the House of Representatives aim to pass a death penalty bill on 3rd and final reading before Christmas.

‘Can courts make a mistake?’

A day after Tagle spoke in an Advent recollection on Sunday, Villegas led a prayer rally against the death penalty on Monday, December 12, in his archdiocese.

In the message he prepared for Monday’s prayer rally, Villegas explained that it is every Catholic’s duty to help in stopping crime, including the use of illegal drugs.

Duterte has vowed to reinstate the death penalty to boost his war on drugs that has killed more than 5,900 people.

Villegas, who is also president of the Catholic Bishops’ Conference of the Philippines (CBCP), wrote in his speech, “Ang mabubuting Katoliko ay laban sa droga.” (Good Catholics are against drugs.)

He said that this, however, does not justify reviving the capital punishment.

(Who will order it? The courts. And who are the courts? People. Is there a person who does not make mistakes? Can the courts make a mistake? Like all other people, they can make a mistake.)

‘Protesting with an alternative’

Villegas added that fiscals and judges can also be bribed.

On top of this, he said the death penalty will victimize mostly the poor who cannot afford good lawyers.

Pope Francis himself has pushed for the abolition of the death penalty around the world. Francis explained that the capital punishment “does not render justice to victims, but instead fosters vengeance.” (READ: Duterte: Death penalty is retribution)

“The commandment ‘Thou shalt not kill’ has absolute value and applies both to the innocent and to the guilty,” the Pope said. – Rappler.com