‘No demoralization in CHED’ despite Duterte order – commissioner 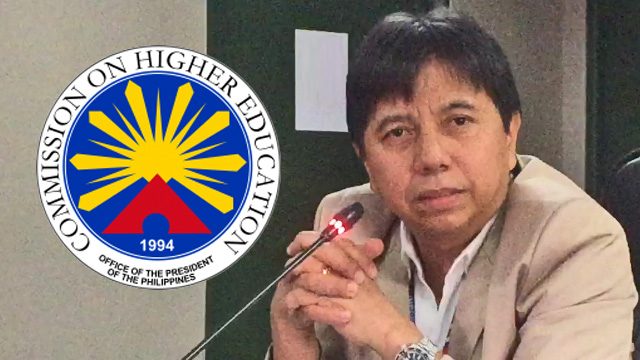 MANILA, Philippines – As far as Commissioner Alex Brillantes Jr is concerned, there is “no demoralization” in the Commission on Higher Education (CHED) even after its chairperson, Patricia Licuanan, was told to stop attending all Cabinet meetings of the Duterte administration.

“Even if they don’t allow the [chairperson] to attend Cabinet [meetings], we will continue to be faithful to what we have sworn to as public officials. We are all part of the bureaucracy, [and] the bureaucracy provides continuity and stability,” he told reporters in a press conference on Monday, December 12.

Brillantes said the commission’s national directorate meeting on Monday pushed through despite some members of the CHED leadership questioning Licuanan’s legitimacy.

“We have now a pending letter sent to Malacañang for resolution, so let’s wait. That was our discussion: Do we wait for Malacañang’s answer or not? And there was this school of thought that we have to continue our job, there’s continuity, there’s stability, so while waiting for Malacañang’s response, the [directorate] meeting pushed through,” Brillantes said in a mix of English and Filipino.

He was referring to CHED Executive Director Julito Vitriolo’s letter to the President asking the latter to designate newly appointed commissioner Prospero de Vera III as officer-in-charge of CHED, in place of Licuanan.

In his letter to the President, Vitriolo criticized Licuanan’s refusal to obey Duterte’s “legitimate, fair, and reasonable order.” He said the CHED chairperson already lost the trust and confidence of the President.

On Monday, Vitriolo even stepped out of the national directorate meeting after he questioned Licuanan’s legitimacy to lead the meeting.

De Vera also skipped the meeting after he was “outvoted” when he took the position that Licuanan should “step aside” and allow commissioners to determine how to proceed with Monday’s meeting.

But for Brillantes, unless there is an order from Malacañang to stop, the bureaucracy in CHED must continue working.

“The chair is the chair – she presides over the meeting, both administrative and substantively. There are things that still have to be clarified, so who are we to tell her not to preside? We have to have an order,” he explained.

Brillantes said the President’s order for Licuanan to stop attending Cabinet meetings should not be equated as an order for her to resign.

“I was reading the papers when I read [that] VP Leni, she left. But when she resigned, in fact the President had a heavy heart in accepting the resignation. In other words, it wasn’t equivalent, not attending the meetings and resigning. At least for me, based on my own interpretation, it’s not the same,” he explained.

While Vitriolo in his letter sought Duterte intervention so as to “stabilize the situation in the Commission,” Brillantes maintained there is already stability in CHED in terms of delivering and implementing programs.

“But in any organization, you have dynamics. Debate, that’s part of stability. Stability [means] healthy discourse, and that’s what we have right now,” Brillantes said.

He gave an assurance that the current CHED leadership will continue to support the President and his administration.

“Secretary Licuanan has constantly, faithfully attended all Cabinet meetings, making sure that the pronouncements in our commission are aligned with the President,” he added.

Like Licuanan, Brillantes is an appointee of President Benigno Aquino III. Duterte’s memorandum circular asking officials appointed by Aquino to resign also applies to the commissioner, although his term ends in 2017.

On Monday, Vitriolo showed reporters a 4-page manifesto signed by at least 17 CHED officials and employees.

Like Vitriolo’s letter, the December 12 manifesto asked the President to appoint a chairperson who will represent CHED in Cabinet meetings, as well as 3 new CHED commissioners.

De Vera told reporters on Monday that he has “nothing to do” with both Vitriolo’s letter and the manifesto of the CHED officials.

“Those sowing intrigue on Facebook that I’m the one spearheading this, I tell very categorically that is false and that is not true,” he added.

“I worry for the staff, especially because you know, commissioners, they come and go, but the directors, they are the ones who stay and they are accountable for the actions, so their concern about whether the decisions being made, decisions that are legitimate, to me is a valid concern.”

But Brillantes countered: “Commissioners come and go. [But] even the commissioner and chair, we are just as committed as the career officials. Are we replaceable just because we are political appointees? No. There are very, very high standards here, and that’s the reason why we have a term.”

Still, De Vera said the situation in CHED right now “has no precedence in any government agency.”

“It’s very unusual if the career officials question the leadership and say there’s a problem. It doesn’t happen in agencies and there is no precedent to guide us, that’s the problem,” he added.

Echoing Vitriolo, De Vera said they will maintain a “wait-and-see” attitude for now, while there are no clear instructions yet from Duterte. – Rappler.com

Eat as much Pancake House chicken as you can for P399

Busog to the max! EDSA Eats buffet lets you feast for P699