Dec 14, 2016 10:18 PM PHT
Rappler.com
Facebook Twitter Copy URL
Copied
The Communist Party of the Philippines says it will hold a national assembly in a guerrilla zone in President Duterte's home city of Davao on December 26 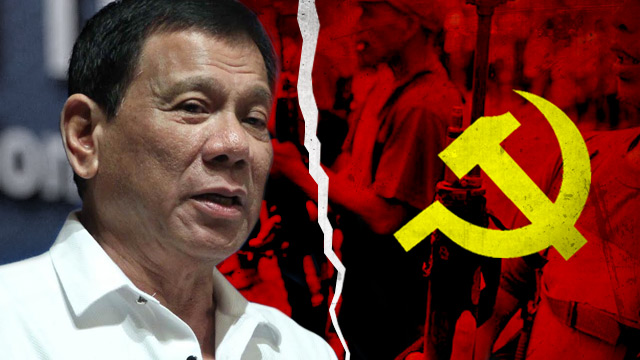 MANILA, Philippines – The Communist Party of the Philippines (CPP) on Wednesday, December 14, once again rebuked President Rodrigo Duterte for his failure to release more political prisoners, as it called on supporters to show indignation through peace rallies on December 26, the party’s 48th anniversary.

In a statement, the CPP said it is going to hold a national assembly in a guerrilla zone in Duterte’s home city of Davao, alongside mass demonstrations nationwide on December 26.

“The Communist Party of the Philippines calls on the Filipino people to manifest their indignation over the Duterte regime’s failure to fulfill its peace vows,” the party said. “The Party calls for peace rallies nationwide on December 26 to demonstrate the Filipino people’s unity for a just and lasting peace to coincide with the celebration of the Party’s 48th anniversary.”

The statement came days after the President said he was not going to budge any further in his position against releasing more political prisoners, as what the communist-led National Democratic Front (NDF) is demanding.

The Duterte administration and the NDF are in the middle of a peace process that has been delayed over their failure to agree on the status of the more than 400 alleged guerrillas still detained in Philippine jails nationwide. (READ: NDF presses general amnesty for political prisoners)

The NDF is demanding the release of at least 130 more political prisoners this year, something the President has shot down. He had previously released at least 20 of them, all consultants of the NDF in the peace talks.

He said complying with the wishes of the NDF this time around would give the government little room to maneuver in the peace negotiations.

But the CPP reminded Duterte that he had promised the rebels the release of all political prisoners. It was a promise he “made twice,” the party added.

The rebels said they have bent over backwards in the peace process in the face of these failed promises. They said they’re finding it more “untenable” to maintain the unilateral ceasefire that they had declared at the resumption of the peace negotiations in August.

“In the face of Duterte’s unfulfilled peace vows, his closing ranks with the US and the AFP, and continuing military operations and war of suppression in the countryside, the unilateral ceasefire declaration issued by the CPP has become increasingly untenable to maintain,” the CPP said.

The guerrillas backed Duterte in the last presidential campaign. In exchange, the President appointed at least 3 leftist leaders in his Cabinet.

He’s confident in their support to the extent that only a few days ago, he declared that the rebels will die for him. – Rappler.com