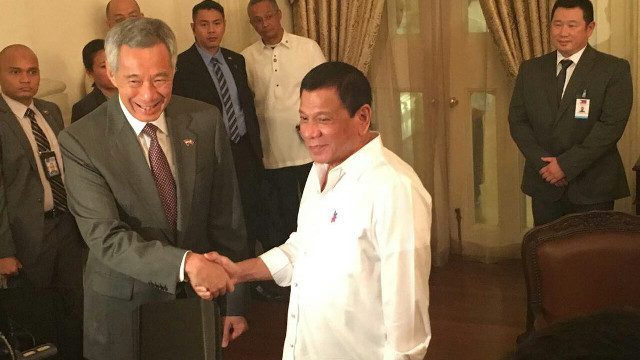 Foreign Secretary Perfecto Yasay Jr, in a video message to reporters, said these were among the major topics discussed during the expanded bilateral meeting between the two leaders and their ministers on Thursday, December 15.

“We talked a lot about the areas of mutual cooperation, particularly in the field of the fight against terrorism, the fight against illegal drugs, these are basic things we both agreed to pursue. And also in the area of cooperation, we expect to secure our borders from transnational crimes,” said Yasay on Thursday from Istana where the meeting took place.

In recent public speeches, Duterte has drawn the public’s attention to the threat of terrorism, pointing out the connections of the local Maute terror group to the Islamic State of Iraq and Syria.

A state of national emergency remains under effect in the Philippines after the deadly Davao City bombing in September, while the Philippine National Police has placed itself under “terror alert level 3” after a bomb was found near the United States embassy last November.

Duterte has not slowed down either in promoting his administration’s fight against illegal drugs.

While he has blasted foreign leaders and international organizations critical of his “drug war,” he has heaped praised on those who have been “helpful,” including China and Chinese real estate tycoon Huang Rulun, who donated P1.4 billion.

Aside from seeking help with combating terrorism and drugs, Duterte sought to get to know Singapore’s leaders.

“This trip was basically intended for the President to get to know our Asian leaders and to relate with them especially so because we are having our ASEAN (Association of Southeast Asian Nations) chairmanship next year,” Yasay said.

It will be the Philippines’ turn to host the ASEAN’s yearly summit in 2017.

After the two meetings, Duterte and his Cabinet officials were treated to a state banquet hosted by President Tan. – Rappler.com