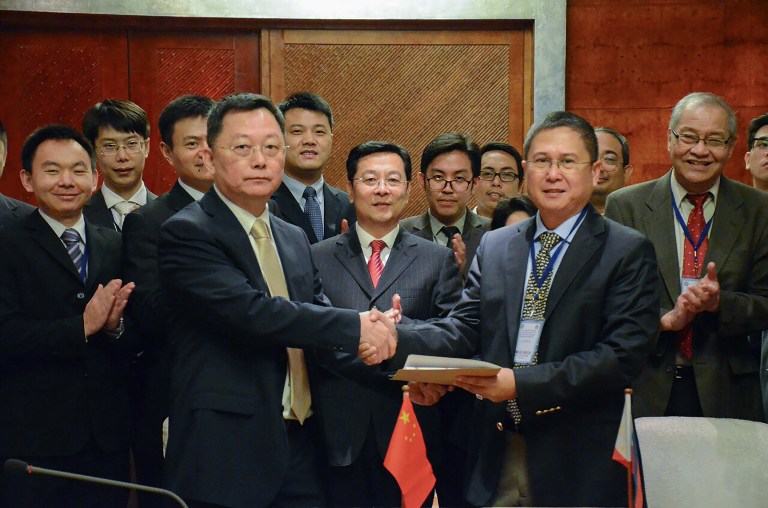 MANILA, Philippines – The Chinese and Philippine coast guards met for the first time on Friday, December 16, and agreed to move forward on maritime cooperation, officials said, as relations between Beijing and Manila warm under Philippine President Rodrigo Duterte.

In a joint statement, the coast guards said possible areas for cooperation included fighting drug trafficking and other maritime crimes, environmental protection and search and rescue.

“This is a milestone because it opened the communication lines between the two agencies involved in the (South China Sea),” Philippine coast guard spokesman Armand Balilo told AFP.

China claims most of the strategic South China Sea – despite partial counter-claims by the Philippines, Brunei, Malaysia, Taiwan and Vietnam – and Chinese coast guard vessels have become an ever-growing presence in the waterway.

Balilo said territorial issues were not discussed, but the meeting was a “confidence-building measure” resulting from Duterte’s trip to China in October.

Duterte, 71, has pivoted his nation’s foreign policy away from traditional ally the United States towards China and Russia.

His predecessor, Benigno Aquino, had angered China by asking a UN-backed tribunal to outlaw Beijing’s claims to most of the South China Sea.

A July ruling gave Manila a sweeping victory but Duterte vowed not to “taunt or flaunt” it as he sought to improve economic relations, while praising China’s support for his deadly drug war.

The meeting took place after a US think tank released images Wednesday that appeared to show China had installed “significant” defensive weapons on artificial islands it had controversially built over contested reefs.

Philippine Defence Minister Delfin Lorenzana said Manila was trying to verify the report but if true, it was a “big concern” for the international community as it would mean China was “militarizing” the area.

The Philippines will host the inaugural meeting of the JCGC in February. – Rappler.com