Duterte wants VFA scrapped, but will ‘wait’ for Trump

Dec 17, 2016 1:44 AM PHT
Pia Ranada
Facebook Twitter Copy URL
Copied
Though he wants the military deal with the US abrogated, Duterte says he will wait before making any decision 'in deference' to Donald Trump's assumption of the US presidency 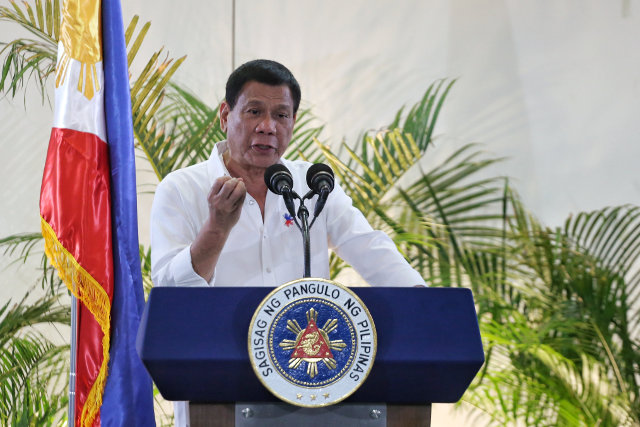 SINGAPORE – President Rodrigo Duterte warned of the eventual abrogation of the Visiting Forces Agreement (VFA) with the United States after the US did not renew an aid package for the Philippines.

“You know America, you might also be put to notice, prepare to leave the Philippines, prepare for the eventual repeal or the abrogation of the Visiting Forces Agreement,” said Duterte on Friday, December 16, during a speech in Davao City after arriving from Singapore.

His declaration was prompted by his anger about the non-renewal of a grant from the Millennium Challenge Corporation, a US aid-giving body, announced on Thursday. (READ: Duterte on non-renewal of US aid: We’ll be glad to lose it)

“The Supreme Court said it’s an executive agreement not a treaty. I am putting them on notice. I will decide any time soon,” he added.

But the VFA is a treaty that can only be repealed by an act of Congress.

It’s possible that Duterte may have been referring to the Enhanced Defense Cooperation Agreement a more recent deal which the Supreme Court has declared is an executive agreement that does not require Senate approval. He previously said he wants to scrap EDCA.

The VFA, which took effect in 1999, outlined guidelines for the conduct of American troops visiting the Philippines. The agreement is the foundation for military exercises between the Philippines and the US, some of which the Duterte adminstration has already stopped.

After his threat about the VFA, Duterte went on a fiery tirade against the US for treating the Philippines like a “doormat.”

But in the same speech, Duterte said he might defer his decision on the VFA out of respect for US President-elect Donald Trump and new US Ambassador to the Philippines Sung Kim, two officials he seems to have taken a liking to.

“[Trump] was very nice, very courteous, I could not catch any hostile drift. In deference, I will just wait, I will let Obama fade away. If he disappears, then I will begin to reassess,” said Duterte.

About Kim, Duterte said, “They have a very good ambassador of Korean descent. He’s very courteous, also in deference to the new set, I will just – it’s a timing actually.”

But the Philippine President warned that if his country gets the “raw end” of the deal, he is personally “not inclined to side” with the US. – Rappler.com