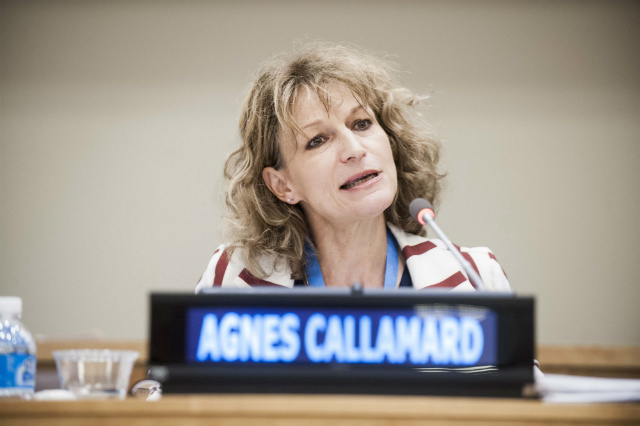 MANILA, Philippines – United Nations (UN) special rapporteur Agnes Callamard proposed a press conference with Philippine President Rodrigo Duterte as she rejected the Chief Executive’s condition that she should debate with him.

“This press briefing would be an opportunity for me to introduce briefly my preliminary findings and for the President to offer his own analysis, reply, or rebuttal,” Callamard said in an email to Rappler on Friday evening, December 16.

“Such a format would exclude debate between us, but allow the President to make immediately public his initial reactions to my preliminary findings should he so choose, and for me to uphold the principles that must guide my mission,” said Callamard, the UN’s special rapporteur on extrajudicial, summary, or arbitrary executions.

Callamard said she and Duterte can hold the joint press conference after her standard debriefing with the government.

Callamard wants to look into extrajudicial killings in the Philippines as Duterte’s war on drugs has killed almost 6,100 people since July 1.

In a separate note, the UN rapporteur explained that she refuses to debate with Duterte because investigations during her trip “may include a number of sensitive, if not confidential, matters including evidence in ongoing trials; ongoing investigations; killings which may not yet have been investigated; and meetings with alleged victims and alleged perpetrators.”

“Many of these matters should remain confidential for the sake of due process, in keeping with the principles of fair trial and presumption of innocence, and to avoid future accusations of contempt of court, amongst other things.  They cannot and should not be publicly debated,” she said.

Callamard added that the findings of her trip to the Philippines will be “preliminary,” subject to further research and analysis as she drafts the mission report.

She said the government and other parties can provide additional information after her trip to the Philippines.

Barred by Code of Conduct

She said that UN rules prohibit her, too, from debating with Duterte.

She cited Article 3.f of the Special Rapporteur Code of Conduct “which clearly request” that she “shall not seek or accept any instructions from any government or other actor.”

She also mentioned Article 5 regarding her commitment to perform her duties “from a completely impartial, loyal, and conscientious standpoint.”

On top of her role as UN special rapporteur, Callamard is also the director of the Global Freedom of Information Project at Columbia University in the United States.

Before this, Callamard worked as chef de cabinet for the secretary-general of the human Amnesty International, and also as the group’s research policy coordinator.

An expert in human rights, she holds a doctorate in political science from the New School for Social Research in New York.

Duterte invited Callamard to investigate extrajudicial killings in the Philippines, provided that she agrees, among other things, to debate with Duterte about her findings.

Philippine Foreign Secretary Perfecto Yasay Jr on Friday added that Callamard should apologize for her “arbitrary” conclusions on alleged human rights abuses in the Philippines and blamed her for the decision of the US Millennium Challenge Corporation to scrap its aid to the Philippines. – Rappler.com