Dec 19, 2016 5:00 PM PHT
Patty Pasion
Facebook Twitter Copy URL
Copied
A coalition of labor groups says the new order set to to be issued on December 28 will only benefit employers 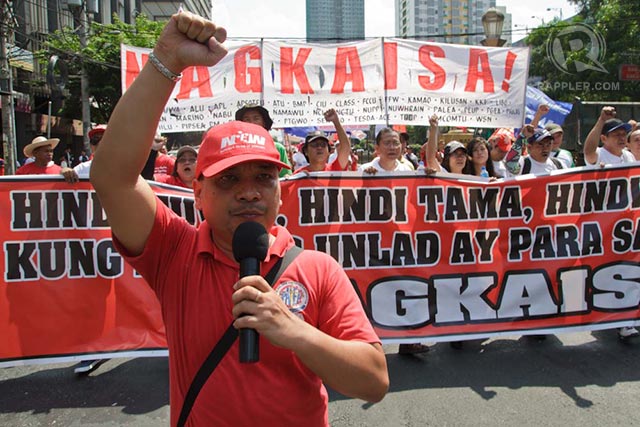 MANILA, Philippines – A coalition of labor organizations considers the Department of Labor and Employment’s (DOLE) new order set to be issued on December 28 as the death of the government’s battle against the illegal practice of labor-only contracting.

Nagkaisa spokesperson Alan Tanjusay said that among the salient points of the DO, which was presented to them during a meeting last week, includes a “win-win” solution that the Department of Trade and Industry (DTI) is proposing on behalf of employers.

The compromise would give the burden of regularizing workers to the manpower service providers instead of the principal employers, according to Tanjusay. Service providers serve as the middlemen between the laborers and the companies in need of contracted workers.

“DOLE should abolish manpower service providers so that hiring is direct between a worker and a firm. In that way, an employee-employer relationship will exist,” said Tanjusay in Filipino during a phone interview.

Regularizing workers in their respective service providers, Tanjusay said, will also harm their security of tenure.

“What if the contract between the service provider and the principal employer is abrogated. What happens to the worker’s security of tenure? Who will give separation pay?” he stressed.

Labor Secretary Silvestre Bello III is reportedly set to release Department Order 30 (DO 30) that will provide stricter guidelines on job contracting. This will replace DO 18-A or the implementing guidelines of Articles 106 to 109 of the Labor Code of the Philippines, which legalizes subcontracting. (READ: After Day 100: How Duterte gov’t can fight contractualization better)

Tanjusay said that among the important provisions of the new directive is the higher capitalization requirement for service providers.

Service providers now are required to have P10 million of capital before engaging in a contract with companies, important to protect workers an employers from fly-by-night contractors.

What labor groups want is for President Rodrigo Duterte to sign an executive order that will end all forms of fixed-term employment.

Nagkaisa said they have submitted a draft EO to DOLE last November 10. Tanjusay said the proposal has been brought up at DOLE’s level and will now be taken up at the Tripartite Industrial Peace Council (TIPC), which convenes all stakeholders of the labor sector.

They are also calling on Bello to endorse House Bill 4444 (Security of Tenure Act) to Duterte so he may certify it as urgent before Congress.

Since the Duterte administration assumed office, DOLE has reported over 25,000 regularized workers. Nagkaisa wishes to validate the executive department’s claim, but Tanjusay said the DOLE has not responded to their request for more information. – Rappler.com