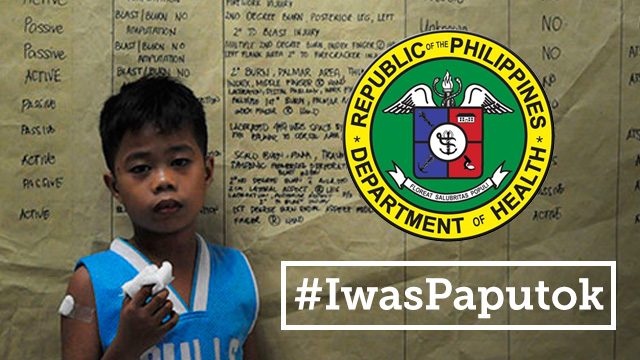 MANILA, Philippines – Ahead of Christmas Day, the health department began its annual monitoring of firecracker-related injuries as part of the #IwasPaputok campaign.

Health Spokesperson Eric Tayag on Thursday, December 22, disclosed on his Twitter account the latest count of firecracker-related injuries in the country.

As of 6 am Thursday, the health department has recorded 3 injuries, including a 6-year-old girl from Ilocos Norte who injured her eye due to “boga,” a device made of polyvinyl chloride pipe which is most prominent during the holiday season.

A 9-year-old girl from Manila also injured her hand with the banned firecracker piccolo, while a 10-year-old boy from Pasay injured his hand with a luces.

Piccolo has been the leading cause of firecracker-related injuries for years.

“For this year, instead of firecrackers, the public is encouraged to use safe merry-making instruments and alternative noise-makers such as ‘torotot’, car horns, or by playing loud music. Also, the local government units are urged to foster community firework display,” Health Secretary Paulyn Ubial had earlier said.

Last year, the health department recorded a total of 932 firecracker-related injuries between December 21, 2015 and January 5, 2016. Majority of the injuries were caused by illegal fireworks.

There was also one death due to massive injuries from an exploding Goodbye Philippines.

The proposed executive order (EO) that would limit the use and possession of firecrackers or pyrotechnic devices in the country has been put on hold until 2017.

This way, government can discuss the impact of the proposal on the fireworks industry while finding practical ways to impose the ban.

The proposed EO wants to achieve Davao City’s injury-free status after it prohibited the manufacture, sale, distribution, possession, or use of firecrackers or pyrotechnic devices in the city since 2002. – Rappler.com