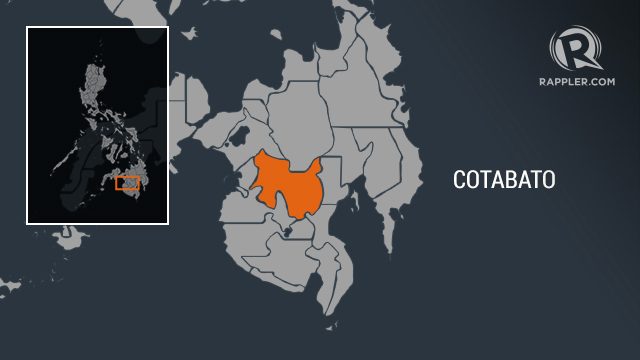 MANILA, Philippines (UPDATED) – Thirteen people were injured in a blast outside a church in Midsayap, Cotabato on Saturday evening, December 24.

The blast ripped through a police car and hit churchgoers arriving for Christmas Eve mass at the Archdiocesan Shrine of Santo Niño.

He added that the blast occurred about 30 meters (98 feet) away from the church’s entrance and caused panic.

Authorities did not immediately say who was responsible for the blast, which a police report said was caused by an unspecified explosive.

“All victims suffered minor injuries except for one female civilian who was seriously injured [on] her foot,” regional police spokesman Superintendent Romeo Galgo said in a written report.

A member of the Midsayap police force, SPO4 Johnny Caballero, was among those injured.

A police investigator who asked not to be named told Agence France-Presse it appeared the suspects had initially targeted the church but later settled for a patrol car assigned to guard the building instead.

“It seems they wanted to get closer but due to heavy security they opted to throw the explosive at the police car blocking the road,” the officer added.

In a statement, the Midsayap local government condemned the blast as an “act of cowardice” and a “senseless deed.”

“It is sad to note that things like these cause harm and distress to the peaceful people of Midsayap especially as we celebrate this time of joy and giving,” it said.

“We ask the people of Midsayap to collectively fight these forms of violence with prayers and acts of love and trust to one another. We believe that good shall always and will always triumph over evil.”

The Midsayap local government also vowed to punish the perpetrators.

“As we look deeper into the details of this incident, we will make sure that those behind this will face the full force of law. Our authorities are now in full coordination to attend to the wounded and those who need help,” it said.

“We encourage vigilance and caution to everyone. Violence and terror do not deserve a place in our peaceful community.” – with reports from Agence France-Presse / Rappler.com