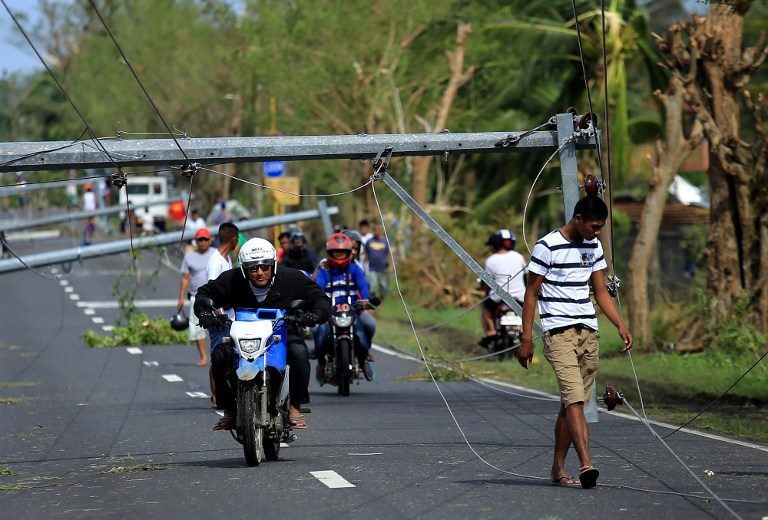 MANILA, Philippines (UPDATED) – Typhoon Nina (Nock-ten) left at least 6 people dead and 19 others missing, the government said in an update on Tuesday, December 27.

In the worst incident, the MV Starlight Atlantic ferry sank off the coastal province of Batangas, killing one and leaving 19 crewmen missing, according to the Philippine Coast Guard.

“Our personnel are still conducting search and rescue in the waters off Maricaban Island and in the vicinity nearby,” he said on Tuesday. “Our station is looking for any floating bodies within the area.”

Five others were killed by floods and falling objects knocked down when the storm hit.

In Albay, 3 people were reported dead, according to a Monday, December 25 report. The casualties were Espelita Begas Marilad, 57, who was hit by the fallen concrete wall inside her home at the height of the typhoon; and couple Antonio Calingacion, 73, and Teresita Calingacion, 70, who were found dead in Viga River. All 3 were residents of Polangui town.

“We’ve done everything to protect our people from Nina’s wrath but the incident is beyond our control,” said Albay Governor Al Francis Bichara on Monday. “We evacuated hundreds of thousands people before the typhoon strikes for their safety with complete food provision.”

Catanduanes Governor Joseph Cua, in a phone interview, said that there was one reported casualty and dozens wounded in his province. Various roads were not passable due to landslides but clearing operation are currently being done by the Department of Public Works and Highways.

Cua said his office could not provide more details yet on the person who died.

Another casualty from the typhoon was also not yet identified.

“Government and private properties were destroyed specifically houses made of light materials were totally trampled to the ground as Nina unleashed its fury on Christmas Day,” said Bernardo Rafaelito Alejandro, regional Office of Civil Defense (OCD) and director of the Regional Disaster Risk Reduction and Management Council (RDRRMC).

Alejandro and other regional disaster officials immediately flew to Catanduanes via Philippine Air Force helicopters to assess the impact of the typhoon.

Catanduanes, which is under a state of calamity, remained without electricity.

Cua, who was in Manila when the typhoon hit his province, said he is directly working with officials from the National Disaster Risk Reduction and Management Council (NDRRMC). Following Cua’s request, the NDRRMC committed 4 C-130 planes packed with relief good intended for the province’s typhoon victims. One of them left Cebu for Catanduanes Monday afternoon.

In the city of Ligao in Albay, many streets and farms were in ankle-deep water while some homes remained caked in mud left by flooding.

Masseuse Erna Angela Pintor, 20, said she and her family spent a sleepless Christmas in fear as the strong winds ripped off part of their roof.

Their neighbors living near the river bank sought refuge in their home as the waters rose to their chests, she recalled, though her own family was luckier.

“The floods (last night) only reached to our knees. Thank goodness the current wasn’t that strong,” she told Agence France-Presse.

“This was supposed to be a celebration but we cannot celebrate. This is a sad Christmas for us. No one (in the family) died but a lot of our neighbors’ homes were washed away.”

More than 383,000 people have fled their homes while over 80 domestic and international flights have been cancelled, the OCD said, as the unusually late typhoon marred Christmas celebrations in the largely Christian nation.

The government weather bureau PAGASA said that as of 2pm local time, Nina is moving northwest at 20 kilometers per hour and is now off to the West Philippine Sea. It is expected to exit the Philippine Area of Responsibility by Wednesday, December 28.

The bustling metropolis of about 13 million was eerily quiet the day after Christmas with the usual holiday revelers staying indoors as the storm approached. – With reports from Agence France Press and Rhaydz Barcia in Legazpi City