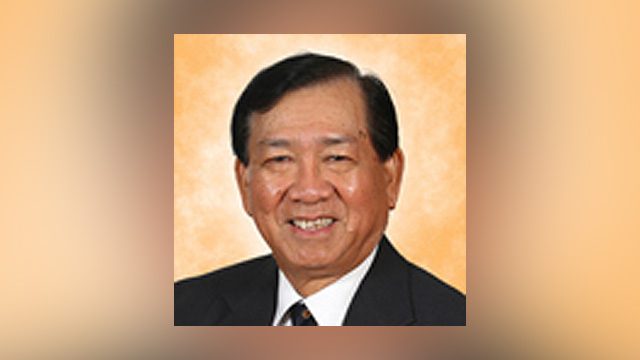 MANILA, Philippines – Ombudsman Conchita Carpio Morales has ordered the filing of graft cases against against former 2nd district Representative Simeon Datumanong of Maguindanao in relation to the misuse of public funds.

An investigation by the Ombudsman found that Datumanong had P3.8 million of his Priority Development Assistance Fund (PDAF) coursed through the Maharlikang Lipi Foundation Inc (MLFI) as NGO-partner. The Commission on Audit (COA) found that the choice of the foundation was made without public bidding.

The P3.8 million was covered by a Special Allotment Release Order issued by the budget department in favor of the National Commission on Muslim Filipinos (NCMF) as implementing agency. The money was intended to finance livelihood programs such as soap making, candle making and meat processing for the municipalities of Mamasapano, Ampatuan and Datu Abdullah Sanki, the Office of the Ombudsman said in a press statement.

In a December 8-dated resolution, Ombudsman Conchita Carpio Morales said that there was “extraordinary accommodation extended to MLFI in the examination, processing and approval by the concerned NCMF officers of the PDAF releases as shown by the unnumbered and undated disbursement vouchers; and issuance of check prior to execution of the Memorandum of Agreement.”

In his defense, Datumanong claimed that “the Ombudsman should await the final determination of the COA on whether the funds were mismanaged.” Datumanong also insisted that his signatures in the documents were forged.

Morales countered, “The findings of the COA report, or the finality or lack of finality of such report, are irrelevant to the investigation to determine the existence of probable cause.”

Morales also said, “The truth is, Datumanong was aware that, under the Pork Barrel System, legislators exercised post-enactment authority and they were considered to have custody and control of the PDAF-funded projects.”

She cited Supreme Court jurisprudence and emphasized that “under the Congressional Pork Barrel System, it is the legislator that exercises actual control and custody of the PDAF share allocated to him by appropriations statute.”

This is the second set of PDAF charges filed against Sadain. In September 2016, Sadain was charged along with Senator Gregorio Honasan II for the irregular use of Honasan’s P30 million PDAF. – Rappler.com