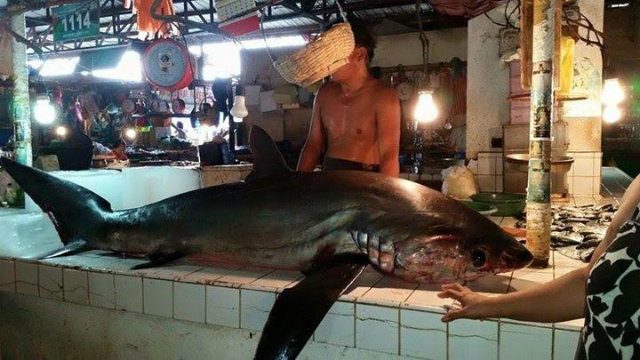 Facebook Twitter Copy URL
Copied
The proposed Sharks and Rays Conservation Act seeks to impose penalties of up to 12 years imprisonment or a fine of up to P1 million, or both, to violators of the ban, including those who 'inflict injury on sharks and rays'

MANILA, Philippines – A Senate bill has been filed seeking to prohibit all trade in sharks and rays, which are being threatened by unchecked overfishing and bycatching.

Authored by Senator Juan Miguel Zubiri, Senate Bill 1245 proposes to forbid “the catching, sale, purchase, possession, transportation, and exportation of all sharks and rays or any part thereof” all over the Philippines.

The proposed Sharks and Rays Conservation Act seeks to impose penalties of up to 12 years imprisonment or a fine of up to P1 million, or both, to violators of the ban, including those who “inflict injury on sharks and rays.”

“No effort must be spared to protect the biodiversity of our waters as well as the natural balance of our marine ecosystem, for the enjoyment and economic benefit of future generations of Filipinos,” Zubiri said in a statement.

The most celebrated Philippine shark is the whale shark, or locally known as butanding, which is a slow-moving filter-feeding animal regarded as the largest fish in the sea, measuring 40 feet or more.

Citing marine scientists, Zubiri pointed out that whale sharks may actually have breeding grounds, not just feeding areas, in the country.

“This was bolstered by the discovery of the smallest living specimen of the whale shark – measuring only 38 centimeters – at a beach in Pilar, Sorsogon,” the senator said.

The shark population has been under severe pressure in recent years, as the numbers killed have climbed due to demand driven by the fin soup trade in Hong Kong and China.

The senator also said that manta and mobula rays are also “at grave risk” due to soaring demand for their gills, which are widely used in traditional Chinese medicine.

Should it be passed, Zubiri’s bill mandates the Bureau of Fisheries and Aquatic Resources (BFAR), in coordination with the Department of Environment and Natural Resources (DENR), to issue the requisite orders to categorize all sharks and rays as endangered species.

It likewise compels the Department of Tourism and the Philippine Commission on Sports Scuba Diving to provide the necessary assistance to the BFAR, DENR, and local government units in identifying the habitats of sharks and rays so that these may be declared as protected areas. – Rappler.com