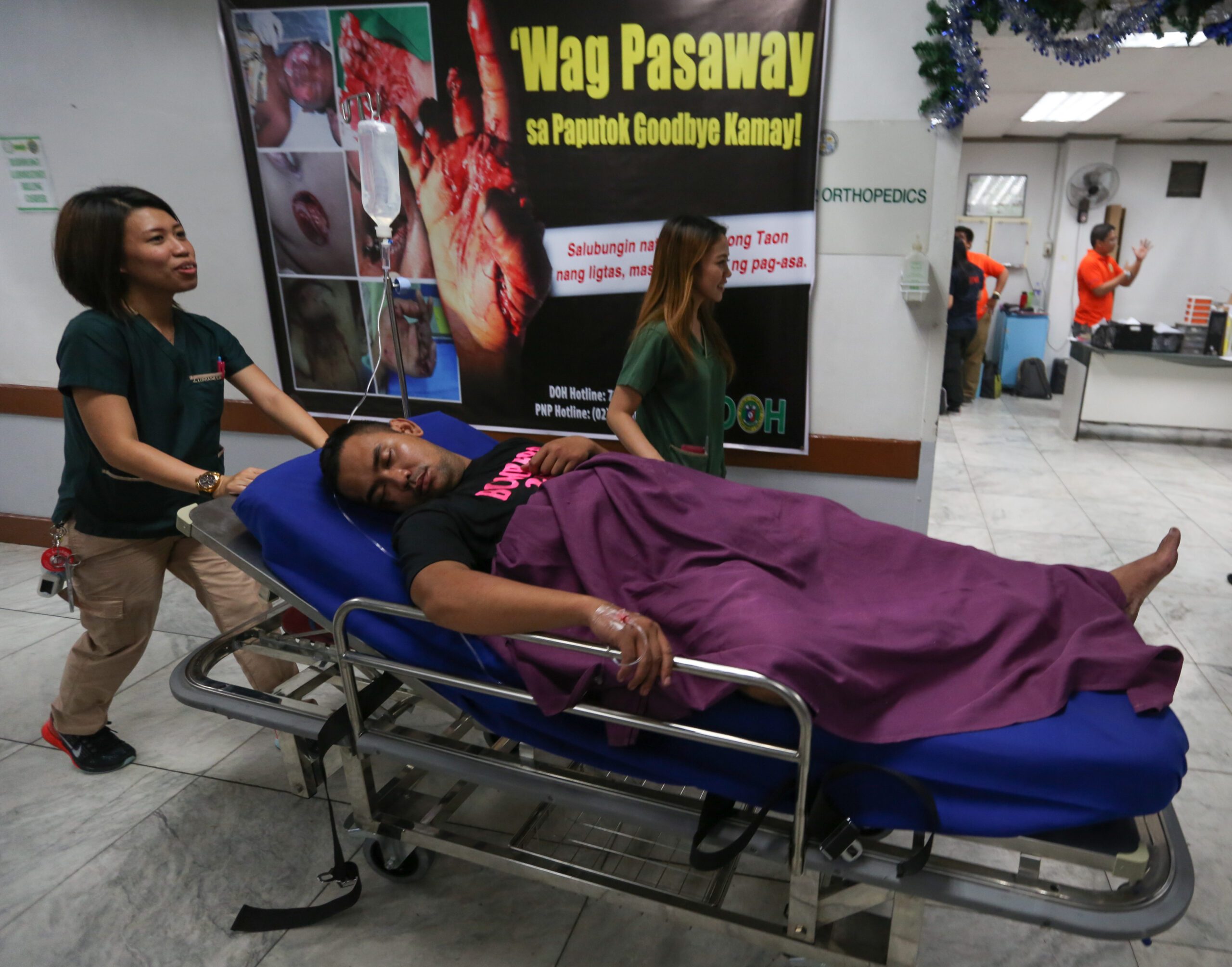 MANILA, Philippines – There would be no nationwide firecracker ban by New Year’s Eve, as President Rodrigo Duterte decided to defer the signing of an executive order on it.

Health Undersecretary Gerardo Bayugo said some industry groups have been lobbying against it, citing loss of profit and livelihood as reasons.

The Department of Health earlier submitted an EO to the President, seeking a shift from individual household use of firecrackers to a community fireworks display.

“I was not there during the meeting but I just learned there are just some groups that are saying that we also need to look at the industry side – the people that will be affected in terms of their livelihood,” Bayugo said in a Palace press briefing on Tuesday, December 27.

(It’s a bit late to implement it because there are already industries that have prepared and they would incur losses. So, there are those who lobbied that maybe we should delay it.)

During the 2016 campaign, Duterte took pride in the absence of firecracker injuries in Davao and planned to replicate it nationwide. Duterte had banned the manufacture, sale, distribution, possession, or use of firecrackers or pyrotechnic devices in the city since 2002.

“In Davao, it was implemented for so many years because the industry can have other market to go to but when it’s a nationwide ban, it’s another thing, it’s a different thing,” Bayugo said.

“And there would be industries, and laborers that may be affected by this move. So, I think that the President was wise enough to consider that even if he is a very strong advocate of a total ban,” he added.

Duterte then said he would just issue a warning to the public that using firecrackers is “dangerous.”

Philippine National Police chief Ronald dela Rosa on Tuesday said the same thing. He said Duterte told him that a longer period for public information is needed before implementing it.

(I tried to ask the President before, he said ‘Maybe the whole Philippines is not ready for that policy yet. Let us see if we could do it by next year.’ There is a longer time needed for information dissemination especially for firecrackers producers, before they buy materials from abroad.)

Before issuing an EO, Duterte said it would be better if Congress passes a law first.

“But I would like Congress to act on it first. And if they do not want it, well I will see if I can do it by executive order. Tutal naman ang ano diyan is the power of the President to come up with measures to protect public property, public interest, public safety,” Duterte earlier said.

But for Bayugo, legislation – although “a better tool” – takes a while to be passed. An EO, he said, would have been better in expediting the nationwide ban.

“But for the meantime, since legislation will take much time, much longer time, we believe that an Executive Order could have been a faster way of making our New Year’s safer for the Filipinos,” he said.

There have been 70 firecracker-related injuries recorded in the country as of December 27, according to Bayugo.

This year’s tally, he said, is “much, much lower than the figures” same period last year. – Rappler.com