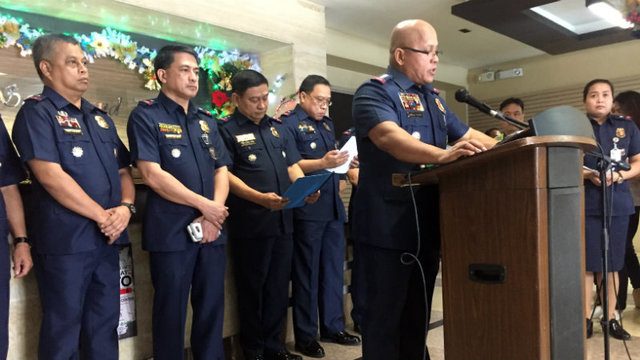 Facebook Twitter Copy URL
Copied
A 5th suspect, who supposedly fired his gun accidentally, is confined in the hospital and is under investigation

Four suspects, one of them a police officer, were arrested while a fifth is confined in the hospital and is under investigation.

Police Officer 1 Daniel Castillo was arrested at Gagalangin, Tondo in Manila for allegedly firing his gun during a drinking spree while he was on duty as a beat patroller.

Another suspect, Joel Abajuela, was arrested in Limay, Bataan after shooting inside a compound in the middle of a drinking spree.

The last two arrested suspects, Jefferson and Jeffrey Reyes, were also drinking when they fired their guns in San Ildefonso, Bulacan. They were arrested after a concerned citizen called the police.

Johny Anob Nufuar, suspected of illegal discharge of firearms in San Miguel, Surigao del Sur, was confined at the hospital when the report was made and is being investigated by the police.

Nufuar supposedly fired his gun by accident while celebrating New Year’s Eve. The fire arm he supposedly used was not recovered by police.

The PNP previously announced a “zero tolerance” policy on indiscriminate shooting during the days leading to New Year celebrations.

PNP chief Director General Ronald Dela Rosa announced that should two subordinates fail to capture suspects within 24 hours, they and their boss will be fired.

Police were instructed to be on duty from 5 pm of December 31 to 5 am of January 1. – Pia Ranada/Rappler.com