Palace on PH ASEAN hosting: It will be ‘extraordinary and amazing’ 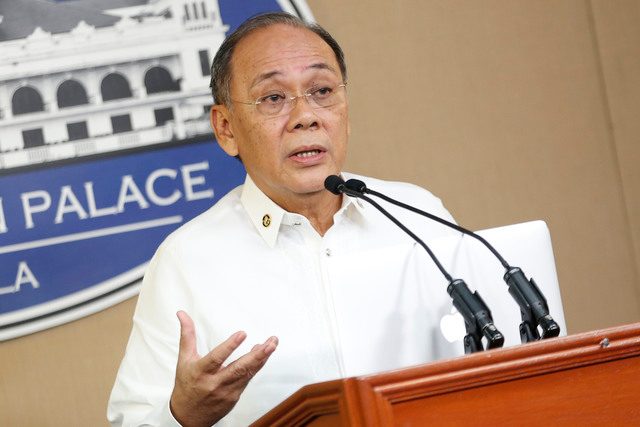 Facebook Twitter Copy URL
Copied
Malacañang gives a preview of the Philippines' ASEAN chairmanship, even as questions hound the award of one government contract in line with the event

MANILA, Philippines – The Philippines has promised an “extraordinary and amazing” hosting of the Association of Southeast Asian Nations (ASEAN) Summit and Related Summits this year.

Presidential Spokesperson Ernesto Abella made the statement in a Palace news briefing on Tuesday, January 3, even as questions hounded the award of one government contract in line with the event.

Abella was asked what the public can expect from the Philippine hosting of the ASEAN meetings in 2017. The commemorative launch of the Philippines’ ASEAN chairmanship is on Sunday, January 15.

“What can we expect in the Philippine hosting? We don’t have specifics, if that’s what you’re asking. But we can always count on, you know, the Philippines has always come up with something extraordinarily creative and amazing,” Abella said.

The Philippine chairmanship of ASEAN coincides with the 50th anniversary of the regional grouping. The government has allocated P15 billion in the 2017 budget for the yearlong event.

The budget for the event is under the Office of the President, with the bulk of the funds allotted for the rental of cars for dignitaries who will be participating in the series of the events leading to the leaders’ summit later this year.

At the Palace briefing, Budget Secretary Benjamin Diokno denied the Vera Files report that the government had violated the procurement law when it granted management contract to sole bidder Stagecraft International.

Stagecraft won the bid to manage the 48 ASEAN conferences to be held from January to December this year after offering just P1 billion for the contract during the bidding conference held on December 1.  The government had alloted P2.8 billion for this contract.

Events Organizer Network Inc (EON) had claimed that the DBM’s Procurement Service bid out the contract as “goods” instead of “services,” a violation of the procurement law.

Diokno defended his department, denying an irregularities in the bidding process. He explained that EON  did not submit bidding documents and that the services being offered by the company would be unable to meet all the requirements for the ASEAN conferences.

“Now, only one bidder submitted a bid. This is the same bidder who won the right to provide the service in the 2015 APEC….If there is only one qualifying bid, that’s valid. ‘Di failure ‘yun (That’s not a failure),” said Diokno.

“Now, EON did not even submit a bid, so I’m surprised that he’s now complaining. And he cannot really comply with [what we need] because the kind of services that he is providing is very limited,” he added.

One preferred contractor only

The DBM secretary also noted that the government allotted a P2.9 billion budget for the contract, but Stagecraft’s offered a lower amount in its bid.

According to him, the contract was a combination of goods and technical services.

“Actually, it’s a combination of goods plus technical [services]. Ang point nung (The point of) EON, which is a smaller company, is dapat brineak-up into 5 para mag-qualify siya dun siya sa technical kasi parang party provider lang siya, ‘di ba? (for the contract to be have been broken down into 5 so it could qualify for the technical services since it is just a party provider, right?)” said Diokno.

He reasoned that Palace Chief Protocol Officer Marciano Paynor Jr, also the director-general for operations of the ASEAN 2017 National Organizing Council, did not want to break up the contract to avoid having to talk to 5 different people.

“So ang may ayaw, ‘yung si (So the person who did not want that is) Ambassador Paynor because he doesn’t want to talk to 5 people, ‘di ba (right)? Isa lang dapat. Kasi kung ibe-break up mo ‘yung contract and you break it up into 5 smaller projects, magka-qualify ‘yung EON dun sa one of the 5 (Just one. Because if you break up the contract into 5 smaller projects, EON will qualify for one of the 5),” said Diokno.

He added that the government is already “running out of time” and must have a “sense of urgency” in finishing preparations for the ASEAN conferences. – Rappler.com