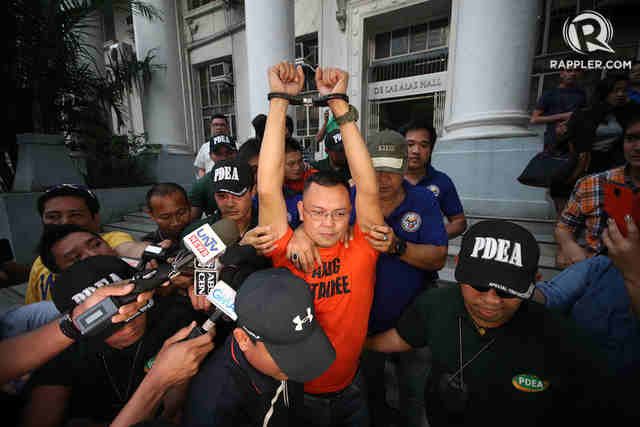 MANILA, Philippines – The Armed Forces of the Philippines (AFP) is seeking custody of Marine Lieutenant Colonel Ferdinand Marcelino, a former drug enforcement agent now facing trial for illegal possession of drugs over his first arrest in a shabu warehouse one year ago. (READ: Ex-PDEA exec Marcelino surrenders to AFP)

“We are filing a petition for custody before the courts para nasa atin muna, sa AFP muna ang kanyang custody (so we’ll have custody of him, the AFP will have custody). It’s in the process,” said Colonel Edgard Arevalo, chief of the AFP public affairs office.

The military is now headed by General Eduardo Año, who, according to Marcelino, was his superior (or handler, in intelligence parlance) who had ordered him to conduct covert operations for the Intelligence Service of the Armed Forces of the Philippines (ISAFP) in 2015. ISAFP was then headed by Año. (READ: Marine Colonel: I would never betray country for drugs)

After his first arrest in January 2016, Marcelino had said he was deployed to check on the involvement of Army personnel in illegal drugs, among others.

Marcelino was freed in June 2016 after the Department of Justice (DOJ) dismissed his case for lack of evidence. But acting on an appeal from the police and the Philippine Drug Enforcement Agency (PDEA), the DOJ reconsidered and filed illegal possession charges before a Manila court in September 2016.

The court issued an arrest warrant against him last December 27.

A week later, on January 3, 2017, the former PDEA agent surrendered to the AFP Provost Martial General based at the military headquarters Camp Aguinaldo.

Arevalo said that pending a court decision on the military’s petition, Marcelino will remain detained at the AFP Custodial Center.

(He surrendered to us. We have a process to follow and we will act on the basis of court action – whether it will grant that petition for custody or not.)

Marcelino claimed he was doing covert operations for the military when PDEA agents found him in January 2016 at a shabu warehouse in a drug bust that seized around P320 million ($6.675 million) worth of methamphetamine hydrochloride (shabu).

Marcelino shot to fame in 2008 for leading the arrest of the so-called “Alabang Boys” and for exposing alleged instances of corruption in the justice department after charges against the 3 he had arrested were dropped.

His commander at the time, former AFP chief Dionisio Santiago, ran for the Senate in the May 2016 elections and was a known supporter of President Rodrigo Duterte.

After Marcelino’s January 2016 arrest, the DOJ, then under the Aquino administration, sought proof that Marcelino’s presence in the shabu warehouse was a sanctioned military operation.

The Philippine Army’s Intelligence and Security Group sent a certificate vouching that Marcelino shared information with the Army, but the DOJ found it too “generic” and proceeded to file a case against him.

In another twist to Marcelino’s case, Senator Leila de Lima showed in September a text message showing Marcelino was being pressured to testify against her. Marcelino claimed it was not true. – Carmela Fonbuena/Rappler.com