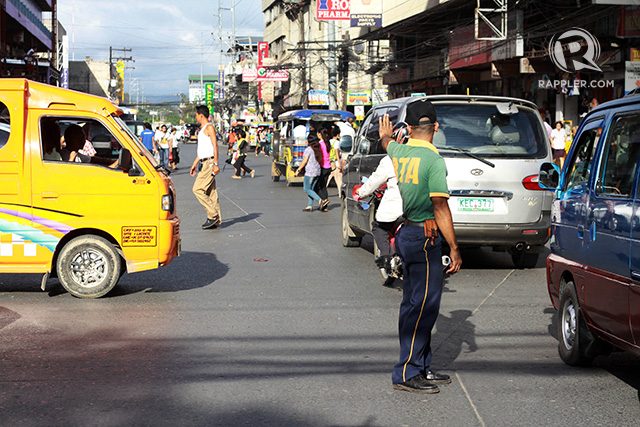 Facebook Twitter Copy URL
Copied
Cris Cabingas, head of the roads and traffic enforcement team at the Cogon public market in Cagayan de Oro, was killed while on duty on December 30

CAGAYAN DE ORO CITY, Philippines – Some 400 personnel of the Roads and Traffic Administration (RTA) took to the streets on Wednesday, January 4, leaving some of the city’s major roads with no enforcers for half a day.

Lawyer Jose Edgardo Uy, chief of the RTA, the city’s traffic management body, said the “solidarity walk” was to show the people they are not intimidated by the death of traffic enforcer Cris Cabingas.

Cabingas, was killed while on duty outside the Cogon public market last December 30. He was the leader of the RTA team assigned in the area. Cabingas was walking along Guillermo Street to monitor the traffic situation there when somebody shot him from behind. He died hours later.

“We are not cowed. We should not fear because we are the authority whose only mandate is to implement the city’s traffic laws,” Uy said at the sidelines of the protest rally.

Wearing their yellow uniforms and carrying placards, RTA enforcers began their march from Gaston Park to Velez Street before proceeding to the Cogon public market, where they lighted candles on the spot where Cabingas was killed.

RTA workers have also expressed their dismay for a radio commentator who said on air that Cabingas deserved to be killed.

On Wednesday afternoon, police has filed a murder complaint against the suspect, whom authorities have yet to identify, at the City Prosecutor’s Office.

It was reported that prior to his death, there had been talks of killing Cabingas but he ignored it. Other RTA enforcers have so far not received threats, Uy said.

Since Uy took over as the RTA chief in 2013, his implemention of Mayor Oscar Moreno’s traffic program called “Hapsay Dalan” aimed at clearing the streets of vendors and illegally built structures was met with opposition.

He was also criticized for imposing anti-jaywalking penalty for the first time at the Divisoria area.

Uy admitted he received death threats when he started as the city’s traffic czar but said he has remained committed to enforcing “Hapsay Dalan.”

Instead of being cowered by Cabingas’ death, Uy said the RTA will now be stricter in implementing traffic rules.

He said Senior Supt. Ronnie Francis, the police city director, has promised to assign police officers to assist the RTA personnel and to secure them in case there is an attempt on their lives while in the line of duty. – Rappler.com