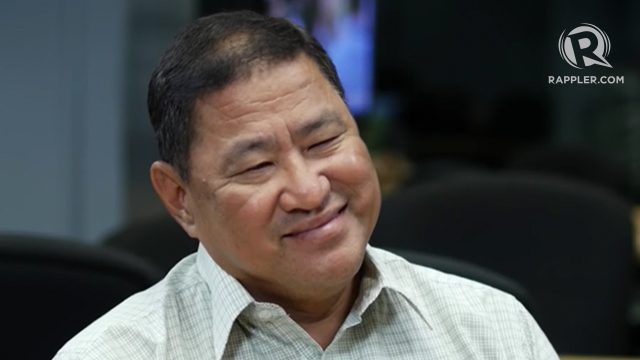 Facebook Twitter Copy URL
Copied
As he reiterates his support for capital punishment, Representative Reynaldo Umali says Filipinos can only choose between drug-related EJKs and the return of the death penalty

“Whatever we have, the approved bill in the committee is not yet it. I mean you know, it will go through a long process of debates, and I guess in the course of the debates, there will be compromises, there will be amendments that will be introduced,” said Umali in a Rappler Talk interview on Friday, January 6.

“I doubt that it will remain unchanged, so I don’t want to make conclusions as yet on what is the pending before the Congress on second reading. But I’m almost certain that when the legislative mill rolls, a lot of things will still happen,” added the Oriental Mindoro 2nd District representative.

The House panel approved the measure seeking to reimpose the death penalty for 21 heinous crimes last December, a move strongly criticized by pro-life groups and the Catholic Church. (READ: Alvarez on Church opposition to death penalty: ‘Why protect evil?’)

Anti-death penalty advocates have long been argued that capital punishment, abolished in the Philippines during the time of then-president and now Pampanga 2nd District Representative Gloria Macapagal-Arroyo, is not a true deterrent to crime. (READ: A lethal mix? Death penalty and a ‘flawed, corrupt’ justice system)

Umali himself used to be against the death penalty, but he had a “change of heart” after seeing the gravity of the drug problem during the House probe into the narcotics trade inside the New Bilibid Prison.

He prefers imposing the death penalty on drug-related crimes only after seeing how drugs affect the minds of addicts and influence them commit heinous crimes.

“Well the point is again, that death penalty is something that I guess can change the way things are happening, because, the questions that I always asked myself [is] ‘If we will just continue with what is, meaning there is no death penalty, do we expect a different result that people will change, the gravity of the crimess being committed now will change for the better?’” said Umali.

He said the return of capital punishment in the Philippines may possibly change the status quo in the country, where more than 6,200 drug suspects have been killed in police operations and apparent summary killings nationwide.

“You know, it’s like a status quo, if we maintain the status quo, we cannot expect an improvement. And so my decision to change is really meant just to tweak or you know change the ball game so that things, we can alter the outcome of the criminal justice system. If we don’t, then it will remain a status quo,” said Umali.

He plans to sponsor the death penalty bill for 2nd reading debates when Congress resumes session on January 16.

A choice between EJKs and capital punishment?

For him, the choice Filipinos have right now is between the continuation of extrajudicial killings or the reimposition of the death penalty.

“Is it okay with you that extrajudicial killings happen without any process? You know, any Tom, Dick, and Harry who thinks you deserve to die will just be killed in the streets. You know, this is the rule of law,” said Umali, using an idiom commonly used to refer to ordinary people in general.

“At least, there is a process whereby people will have to go through this. Of course, there may be judges or justices or fiscals may commit an error in imposing death penalty but somehow this is far better than what it is now,” added the lawmaker.

Umali assured that as the House moves to pass the death penalty bill into law, his committee will also be working to improve the other aspects of the criminal justice system.