No probe, but anti-Duterte plotters can dream on, says DOJ chief 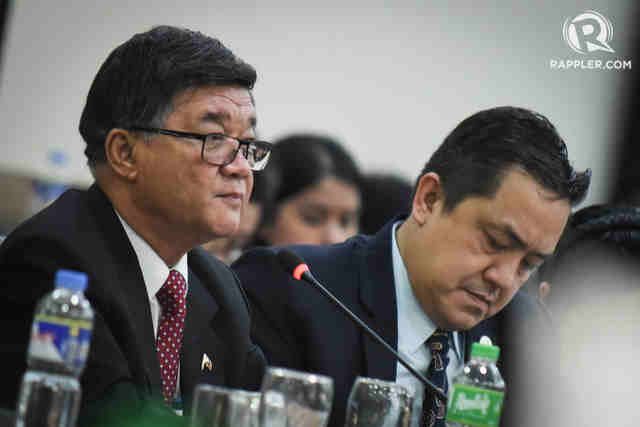 MANILA, Philippines – There will be no Department of Justice investigation just yet into the plans of Vice President Leni Robredo’s supporters to oust President Rodrigo Duterte, as alleged by pro-Duterte bloggers.

“As long as they do not violate the law…there is nothing wrong to dream (sic). You could make a movement for the resignation of the President, but it’s one thing to overthrow,” Aguirre said in a press briefing.

Malacañang, for its part, gave confusing answers on whether it would probe the matter.

“It has really become a national issue. I said even before it becomes a national issue, as one of the president’s men, I am concerned about this. I need to know about the veracity of the reports,” Andanar told radio station dzBB Sunday.

“I said ‘Secretary Jun (Esperon), it is already viral. It can go two ways. Either they are full of truths or full of lies. I have to pass the documents so he can look at it,” he said.

Esperon supposedly told Andanar, as the latter relayed on his podcast: “Gusto naman natin na maging maingat din at may basehan ‘yung ating magiging aksyon. Initially nakikita ko maaaring tingnan pa mabuti ito, mukhang seryoso e. Gusto kong tingnang mabuti pa.” (We want to be careful, so we’ll have a basis for our actions. But I can see that this needs to be looked into further, because it looks serious.)

Before the Cabinet meeting on Monday, however, Esperon said the issue was not on the Cabinet’s agenda because they had more important matters to discuss.

Senate President Pro-Tempore Franklin Drilon, for his part, told Malacañang not to fall for the trap of false or hoax information on social media, adding the probe is “a waste of time.”

“My advice to the executive branch is to exercise extreme caution in giving credence to such reports in social media. Today, anyone can post it especially trolls operating in social media. It’s quite unfortunate such issues are given attention by the executive,” said Drilon, Robredo’s ally in the Liberal Party, in an interview on Monday.

“In the first place, if this is a credible plot you’ll never find it in social media. Isn’t it logical that if you’re plotting something why should you place it on social media?” he added.

The senator also related the dubious case filed against him, former president Benigno Aquino III, and other allies before the Ombudsman over a fake gold shipment to Thailand. (READ: 5 reasons the gold shipment complaint vs Aquino is a joke)

“There was a false report, I signed November 4, 2014, a document which allowed the deposit of $3 trillion in gold deposits to Thailand. This became the basis of a charge in the Ombudsman,” Drilon said.

Senate President Aquilino Pimentel III, for his part, said he is “not bothered” by the issue, although he had not yet read the alleged “leaks”. – Rappler.com