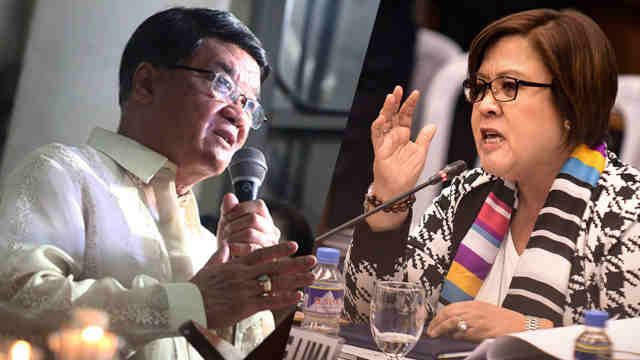 Facebook Twitter Copy URL
Copied
The senator says anti-corruption laws should be revised to deal with cases of 'favoritism,' citing the two fraternity brothers of President Rodrigo Duterte who have figured in a corruption scandal at the Bureau of Immigration

MANILA, Philippines – Senator Leila de Lima has filed a resolution calling for a Senate inquiry into the alleged attempt of Chinese gambling tycoon Jack Lam to bribe some immigration officials.

De Lima filed Senate Resolution 258 on Monday, January 9, urging the Senate Blue Ribbon Committee to probe Lam’s alleged bribery of Bureau of Immigration (B) officials in exchange for the release of over a thousand of his Chinese casino workers held by authorities for working illegally in the country.

BI officials Michael Robles and Al Argosino earlier admitted they received a total of P50 million from Lam’s middleman, former police officer Wally Sombero. The latter, however, had filed an extortion case against the two.

Justice Secretary Vitaliano Aguirre II earlier admitted that he, too, was offered P100 million a month by Lam in exchange for the protection of his gambling interests in the country. (READ: Jack Lam left PH ahead of Duterte order – BI)

Aside from this, De Lima said she wants to know why Aguirre went easy on Lam and the two officials. Robles and Argasino are fraternity brothers of President Rodrigo Duterte and Aguirre at the Lex Talionis Fraternity. The two were eventually dismissed from the service.

“If indeed Lam, through his middleman Wally Sombero, attempted to bribe Aguirre, why didn’t the latter effect right then and there, a warrantless arrest of Sombero, the latter being in flagrante delicto, and thereafter promptly move to prevent Lam’s departure or escape from the country?” she said.

“Simply put, there are too many nagging questions that necessitate a deeper independent probe by the Senate. We cannot just entrust such investigation to DOJ/NBI which are both under Aguirre’s control. It’s like entrusting a wolf to guard the sheep,” she added.

According to De Lima, Aguirre’s lukewarm action on Lam’s criminal offense is suspicious and worrisome, considering that Aguirre is the top prosecutorial officer of the government.

“(This) bribery scandal raises issues on the seriousness and/or capability of the government to enforce its anti-corruption laws in situations where those involved are personal friends of the appointing authority,” she said.

With this, De Lima said there is a need to revise anti-corruption laws to deal against cases of favoritism, saying the principle of command responsibility in bribery and corruption cases should be enhanced.

Gordon, as justice committee head, earlier cleared Duterte of any liability in the extrajudicial killings and said there is no proof of the existence of the Davao Death Squad. – Rappler.com