Jan 9, 2017 8:00 PM PHT
Facebook Twitter Copy URL
Copied
'When we say we aim to significantly defeat the enemy, we mean we want to render them or their capabilities down to a very minimal level," says AFP chief General Eduardo Año 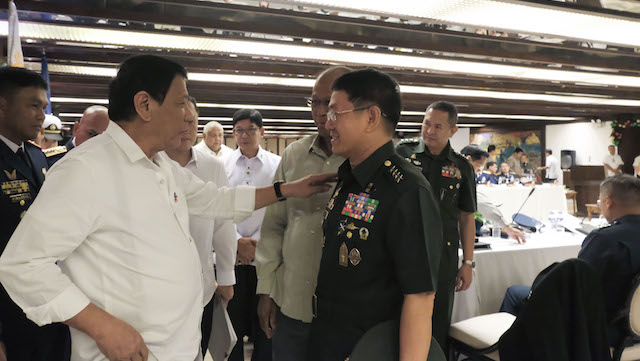 MANILA, Philippines – The Armed Forces of the Philippines (AFP) has set an ambitious campaign plan that aims to crush local terror groups particularly the Abu Sayyaf and Maute Group in the next 6 months.

“The target of the Armed Forces chief of staff is [to finish them off in] the next 6 months. Let’s see if we can do that in 6 months. It will be good. If not, we’ll extend it until the end of the year,” said Defense Secretary Delfin Lorenzana on Monday, January 9.

The Abu Sayyaf Group (ASG) is notorious for its kidnap-for-ransom activities while the Maute Group is known for seeking to attract the support of foreign terrorist organization Islamic State (ISIS).

This is not the first time that the military vowed to crush the ASG under the Duterte administration. The first AFP chief appointed by President Rodrigo Duterte, retired general Ricardo Visaya, also pledged to defeat the ASG when he assumed command of the military in July 2016. (READ: AFP backs peace talks, will ‘finish’ Abu Sayyaf)

Under Visaya’s short stint, the military deployed close to 8,000 troops to Sulu to run after the kidnap group. Yet, in November last year, the ASG kidnapped a German off Tawi-Tawi and dumped his slain companion – a woman – in Sulu.

The military said the ASG is still keeping at least 27 local and foreign hostages in Sulu.

Visaya’s replacement, Armed Forces chief General Eduardo Año, said they will aim to rescue all of them.

Año, a former chief of military intelligence, said they have intensified intelligence operations while encourating communities to assist the government by reporting suspicious activities.

The military, which is under the supervision of the Department of National Defense, just completed a new campaign plan to follow instructions from President Rodrigo Duterte. Development Support and Security Plan (DSSP) Kapayapaan promises to be tough on terrorists but supportive of peace talks with communist insurgents and Muslim rebels.

Without going into details, Lorenzana said there will be organizational changes and troop movements to allow a fresh approach to the problem that has plagued the country for decades. “We are going to do something new or innovative to finish this problem once and for all,” said Lorenzana.

Año said they will assess their accomplishments by June 2017. He expects the local terror groups to be “significantly defeated” by then.

“Campaign plans are assessed every 6 months so we’re going to assess our accomplishments in June. We should have significantly defeated the Abu Sayyaf,” Año said.

“When we say we aim to significantly defeat the enemy, we mean we want to render them or their capabilities down to a very minimal level,” Año added. – Rappler.com