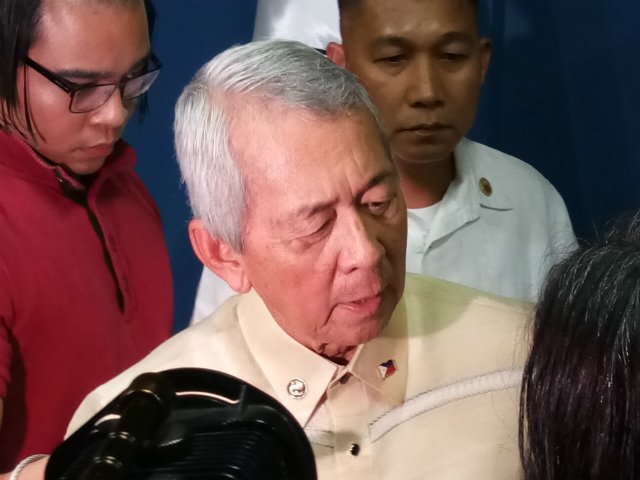 MANILA, Philippines (UPDATED) – While hosting the Association of Southeast Asian Nations (ASEAN) Summit this year, the Philippines rejected the prospect of raising Manila’s legal victory against Beijing during the regional meeting.

“We are not going to raise this issue…because there is really no useful benefit,” Philippine Foreign Secretary Perfecto Yasay Jr said in a news conference on Wednesday, January 11.

Yasay was referring to the ruling by an arbitral tribunal at the Permanent Court of Arbitration against China’s expansive claim over the West Philippine Sea (South China Sea).

Yasay explained that the arbitral ruling “is something that’s there.”

“It’s a final and binding decision to the parties. Whatever is said or discussed by anyone outside, and third parties to the case, will not change the decision,” the Philippines’ top diplomat said.

“We have used the decision as the firm legal basis for us to pursue our claims and move forward when we are able to engage China in negotiating for the implementation of that ruling,” he added.

At the same time, Yasay hailed the Duterte administration’s “pragmatic approach” toward the sea dispute. He said one of its positive effects is “the return of our Filipino fishermen to the Scarborough Shoal without the Philippines asking China to let them go back.”

“The return of our Filipino fishermen to the shoal proves the effectiveness of our pragmatic approach in dealing with China concerning this highly contentious issue,” he said.

“This approach had meant working on other aspects of our bilateral relations with China as confidence-building measures until such time that both sides are ready to tackle the  South China Sea issue hopefully with greater flexiblity and openness in resolving the dispute,” he added.

In Thursday’s news conference, Yasay also said ASEAN and China plan to finalize a framework code of conduct (COC) in the South China Sea by mid-2017.

“The framework COC, if we are able to complete this by mid-2017, will somehow be part of the report to our ASEAN meetings for the year,” Yasay said.

The proposed COC is a binding agreement to ensure peace and stability in the South China Sea, parts of which the Philippines claims as the West Philippine Sea.

Before the COC is finalized, ASEAN and China adhere to a non-binding Declaration on the Conduct of Parties in the South China Sea, which urges “self-restraint” in the disputed waters.

The Philippines’ top diplomat explained that the framework COC “is the general agreement, and if there are necessary details that will have to be put there, then that can be a matter that will be discussed by the ASEAN member states.”

Yasay added that China has been part of the discussion on the framework COC.

“We are sitting down with China in the formulating of this code of conduct, and there is no misunderstanding on this one. They are part of the process, so it is not going to take China by surprise,” Yasay pointed out.