Jan 12, 2017 6:51 PM PHT
Camille Elemia
Facebook Twitter Copy URL
Copied
One of the 5 agreements the Philippines and Japan signed is the Memorandum of Cooperation between their coast guards to 'promote maritime safety and security' 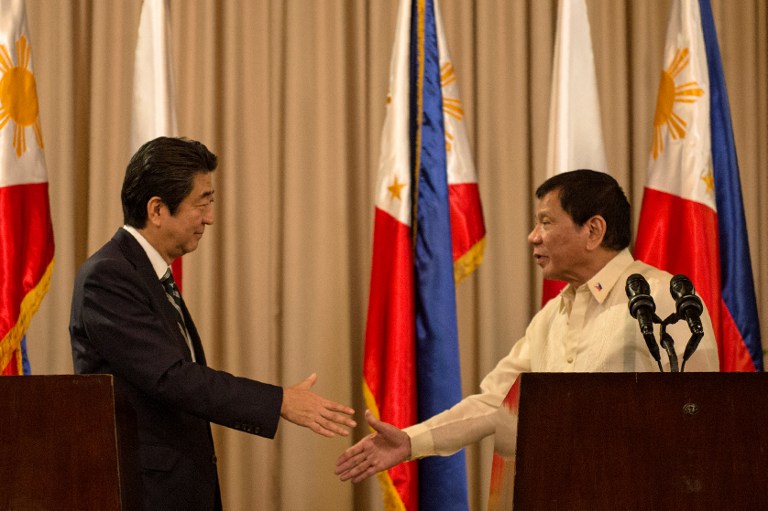 MANILA, Philippines – Japanese Prime Minister Shinzo Abe vowed to give the Philippines $8.66 billion (1 trillion yen) in aid, which would be spread over 5 years.

He himself announced this on Thursday, January 12, at Malacañang Palace, as he began his two-day official visit.

The money will come from official development assistance (ODA) and private-sector investments geared toward infrastructure projects such as construction of subways, among others.

“We will pledge business opportunities through ODA and private investments which will amount to 1 trillion yen for the next 5 years,” Abe said in his press statement.

Aside from this, Japan has also vowed to establish rehabilitation facilities to support Duterte’s campaign against illegal drug use.

The two leaders also agreed on the need to enforce the United Nations resolution on North Korea’s missile and nuclear development.

Abe is the first head of government to visit the Philippines under Duterte. He and his wife are set to go to Davao City on Friday to meet with business leaders.

Abe last visited the Philippines in November 2015 for the Asia-Pacific Economic Cooperation summit. In October 2016, Duterte went on a state visit to Japan and was met by the prime minister.

During the meeting, both Duterte and Abe affirmed the importance of the rule of law and the non-militarization of the South China Sea. Both the Philippines and Japan claim parts of the contested waters.

Abe said he welcomes the closer ties between the Philippines and China amid the arbitral ruling favoring the former. Duterte has been warmer to China compared to his predecessor, former president Benigno Aquino III.

Still, the two governments signed a memorandum of cooperation involving the Philippine Coast Guard (PCG) and the Japan Coast Guard to promote maritime safety and security through joint exercises, patrol and aircraft visits, and capacity enhancement.

During the President’s trip to Japan last October, the Philippine government secured a multi-billion-peso loan and multi-million-peso grant to beef up boats and equipment of the PCG.

The Japanese and the Philippine governments signed a total of 5 agreements, mainly on agriculture and maritime security.

The 5 deals signed are the following: