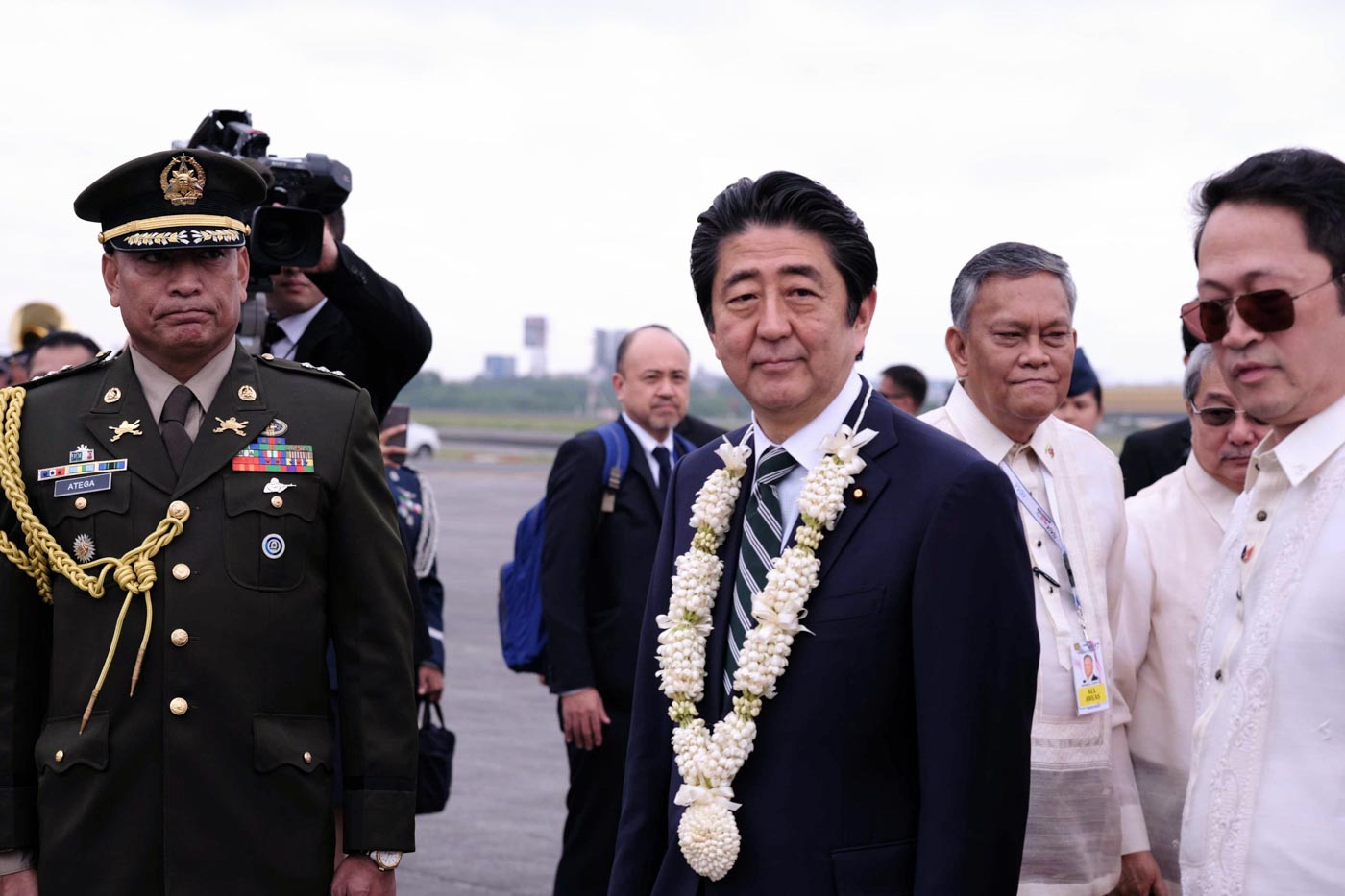 Abe’s two-day visit to the Philippines is the first by a foreign leader since Duterte took office in the middle of last year, highlighting Japan’s importance as the Southeast Asian nation’s top trading partner and foreign aid donor.

Abe is also intent on maintaining Japan’s strong ties with the Philippines as Duterte shakes up his nation’s foreign policy with a shift away from the United States, both nations’ longtime ally, in favor of China and Russia. (READ: In Manila, Abe hails improving PH-China ties)

The trip began with a warm welcome by Duterte at the presidential palace, with the Philippine leader then winning much sought-after backing for his drug war that has claimed about 6,000 lives and raised concerns of mass extrajudicial killings.

“On countering illegal drugs, we want to work together with the Philippines to think of relevant measures of support,” Abe said afterwards, according to an interpreter.

Duterte, who has railed against US President Barack Obama and European politicians for criticizing his drug war, highlighted Abe’s offers of support.

“As the Philippines pursues its campaign to destroy the illegal drug trade apparatus, we welcome the expression of interest of Japan to support measures to address the tremendous social cost of drug addiction,” Duterte said.

Duterte won last year’s elections in a landslide after vowing that 100,000 people would be killed in an unprecedented crackdown against illegal drugs.

Since then police have reported killing 2,180 people in anti-drug operations. More than 3,000 others have been killed in unexplained circumstances, according to official figures.

Often masked assailants break into shanty homes and kill people who have been tagged as drug traffickers or drug users. Rights groups have warned of a breakdown in the rule of law with police and hired assassins operating with complete impunity. (IN NUMBERS: The Philippines’ ‘war on drugs’)

While using foul language to hit back at Obama and other critics, Duterte has praised the leaders of China and Russia for “not interfering” in his drug war.

Trade between Japan and the Philippines was worth $18 billion in 2015, according to official figures, and Abe said Thursday he was committed to more.

With a severely under-equipped military and coast guard, the Philippines has also looked to Japan to boost maritime security as the two nations face separate sea disputes with China.

Japan and China are locked in a long-running row over uninhabited islets in the East China Sea, while Manila and Beijing have overlapping claims in the South China Sea.

However unlike Aquino, Duterte has played down the maritime dispute with China while focusing on economic concessions and Chinese help in his drug war.

Abe said Thursday he welcomed Duterte’s overtures to China, but emphasised the South China Sea was a concern for all nations in the region.

“The issue of the South China Sea is linked directly to regional peace and stability, and is of concern to the entire international community,” Abe said.

Abe will on Thursday night travel to Duterte’s home town of Davao in the southern region of Mindanao, where Japan has supported the peace process with Muslim rebels through development and poverty eradication programmes. – Rappler.com