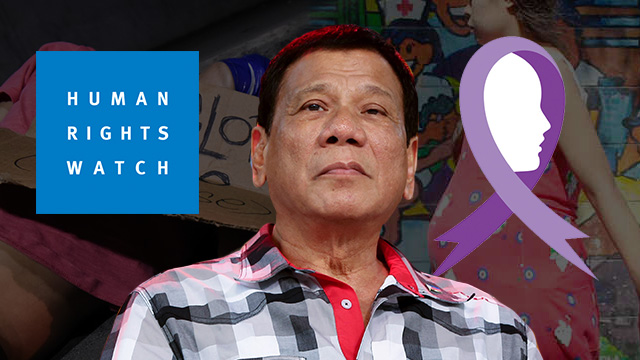 There are an estimated 13.4 million women who rely on government-supplied contraceptive products, HRW said in a statement on Saturday, January 14. At the same time, there have been over 6,200 deaths in the administration’s war on drugs since July 1, 2016, both from legitimate police operations and vigilante-style killings.

The move to restore funds reverses a cut in January 2016 that, according to HRW, “threatened to roll back hard-fought gains in maternal health and reductions in infant mortality over the past decade, made possible by government-subsidized or free contraceptive services.”

President Rodrigo Duterte issued Executive Order (EO) 12 released January 9 to “intensify and accelerate the implementation of critical actions necessary to attain and sustain ‘zero unmet needs for modern family planning’ for all poor households by 2018…within the context of the [reproductive health] law.”

The human rights watchdog group said this is a “bright spot” for the administration.

Health Secretary Paulyn Ubial said during a Rappler Talk interview the EO ensures that couples or individuals who want to practice family planning are able to do so.

Conservative lawmakers surreptitiously cut by P1 billion ($20 million) the 2016 budget for “family health and responsible parenting” which had a P3.2-billion allocation in 2015. The 2016 budget for contraceptives guaranteed under the 2012 Responsible Parenthood and Reproductive Health Act was removed during deliberations of the Senate and House bicameral conference committee.

This deprived poor Filipinos, women especially, of access to government-supplied contraceptive products. The United Nations Population Fund criticized the cut as a threat to “the basic human right to health as well as the right to reproductive choices.”

The budget cut was seen as exacerbating the HIV epidemic among men who have sex with other men, fueled by lack of access to condoms. Government clinics – often the main or only source of condoms for many Filipinos “are likely to exhaust their condom supplies in early 2017,” HRW said.

Palace to critics: Have an open mind

Presidential Spokesperson Ernesto Abella said the President is pushing for the full implementation of the reproductive health law even if it’s not “popular with certain sectors” because he wants to “serve the interest of the whole nation” and not just “the interest of a small group.”

“Alam po natin, nilalabanan ng Presidente ang poverty ‘no. Hindi lang basta anti-poverty, but he also wants to have inclusive prosperity, na ang lahat po umunlad and kasama na po diyan na, if women are empowered physically meron silang health and they can also contribute to the financial health of their families,” he said in a dzRb interview on Saturday.

(We know that the President is fighting poverty in the country. Not just anti-poverty, but he also wants to have inclusive prosperity, so that all will prosper, and that includes this: if women are empowered physically, they can also contribute to the financial health of their families.)

He urged critics of both the RH law and EO 12 to “have a broader and a more open mind.”

(Maybe it’s time for certain sectors in society to evolve in their thinking…for them to be more open and understanding with the human condition. I’m not belittling them, but we need to be able to be more responsible even with our faith.) – with reports from Jee Geronimo/Rappler.com