House opposition: We can produce 50 interpellators vs death penalty

Jan 17, 2017 1:55 PM PHT
Mara Cepeda
Facebook Twitter Copy URL
Copied
(UPDATED) They said among the lawmakers opposing the death penalty are Karlo and Jericho Nograles, who are both allies of President Rodrigo Duterte 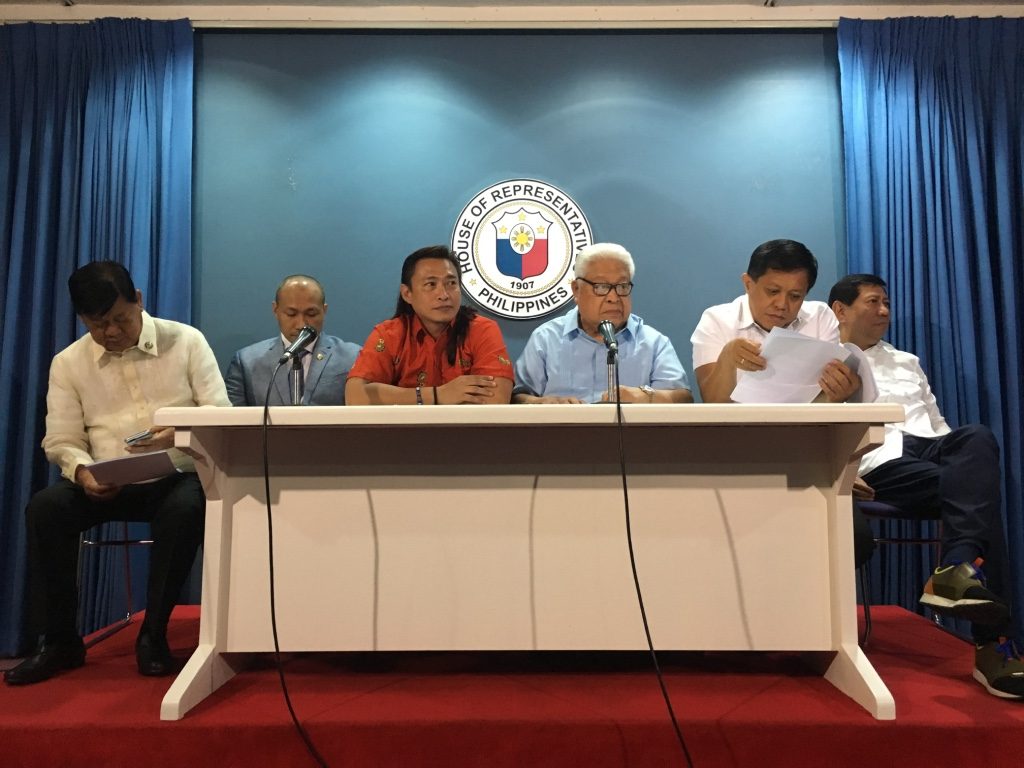 MANILA, Philippines (UPDATED) – Opposition lawmakers in the House independent minority bloc said they could rally at least 50 congressmen to oppose the death penalty bill once the debate on the plenary floor begins.

“Well, the debates are going to be very extensive, particularly from those who plan to interpellate. I think we can produce even 50 interpellators,” said Albay 1st District Representative Edcel Lagman in a press conference on Tuesday, January 17.

He, however, refused to say how many congressmen exactly will oppose the return of the capital punishment.

House justice committee chairperson Reynaldo Umali said he wants the bill seeking to reimpose the death penalty for heinous crimes to be passed on 3rd and final reading by the end of the first regular session in June.

Lagman said most of the anti-death penalty congressmen come from the majority bloc allied with President Rodrigo Duterte, who supports the capital punishment out of “retribution” for victims. (READ: A lethal mix? Death penalty and a ‘flawed, corrupt’ justice system)

Jericho confirmed that he is against reimposing the capital punishment, telling Rappler in a text message: “That is correct. I cannot support the death penalty.”

“The Nograles family is pro-admin. However, we are also pro-life,” said Jericho.

“As for myself, I believe we must prioritize legislation increasing the number of courts, prosecutors, and public attorneys so we can speed up the judicial process from the average of 7 years for the first decision down to hopefully less than a year trial,” he added.

Lagman has already asked Jericho to become one of the interpellators, but the party-list lawmaker said his decision would depend on how the debates would go.

“Debates on the bill should be very factual. The public deserves to see that Congress can make informed decisions,” he said.

His brother Karlo, however, said he will come up with a stand on the death penalty “when the time comes.”

He also hit Lagman for attempting to speak for him and his brother.

“Congressman Edcel Lagman does not speak for me or for my brother Koko. I don’t even speak for my brother. Si Manong Edcel naman, during the admin of PNoy (former President Benigno Aquino III), he was pro-RH (reproductive health), ngayon sa admin ni (now in the administration of) President Duterte, he is anti-death penalty,” said Karlo in a text message.

“He never put words in my mouth before. What should he start now?” he added.

The Nograles brothers are nephews of Duterte, who is the cousin of their mother Rhodora Bendigo.

The family patriarch, former Speaker Prospero Nograles Jr, used to be a longtime political rival of the Duterte family. In two of the elder Nograles’ 3 failed bids for Davao City mayor, he lost to a Duterte – first to Rodrigo and then to his daughter, Sara.

But the Nograles family set aside their local politics to support Duterte during the 2016 polls, which the latter won by a landslide. – Rappler.com