Senators to LP: Decide if you’ll stick with majority 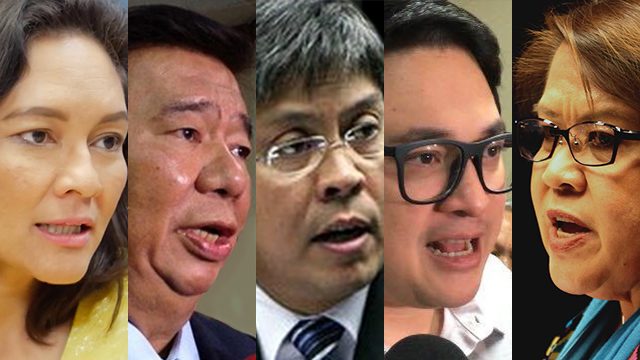 MANILA, Philippines – The Liberal Party (LP) should all stop “paddling between 2 rivers” and decide whether they would still be a part of the majority bloc in the Senate.

This is a common sentiment among some senators, as they criticized LP colleagues for repeatedly voting against the majority even if they are part of it.

The LP bloc senators are Senate President Pro-Tempore Franklin Drilon, Senators Leila de Lima, Francis Pangilinan, and Paolo Benigno Aquino IV. Although not a member of the party, Senator Risa Hontiveros is allied with them after running under the administration slate in May 2016.

Senate Majority Leader Vicente Sotto III admitted there is indeed a “brewing concern” from his colleagues against the LP’s membership in the majority bloc.

He added there are 2 or 3 senators who have expressed concern on the LP’s stand on issues.

“That is the brewing concern by some members of the Senate na nasa majority ka (that if you are with the majority), you should not be stymying the actions of the majority,” Sotto said in an interview on Wednesday, January 18.

Senator Richard Gordon said it is time for the LP to rethink its alignment in the chamber, as he criticized them of “paddling” between 2 rivers.

(During the two-party system, it was clear if you’re majority and minority. When it was gone, the Senate has become very transactional. We always see 7 of them voting together, that is really their partyline while the other side is 14. If that’s the case, to promote peace and avoid word war, make it majority and minority.)

(To me, that’s clearer because others are complaining that they are the ones looking bad because the LP senators are paddling between 2 rivers.)

The 7 senators include the 2 minority senators Ralph Recto and Trillanes and the 5 members of the LP bloc.

Senate President Aquilino Pimentel III, for his part, sees nothing wrong with a divided Senate especially on political concerns.

What is not negotiable, Pimentel said, is disagreements on the Senate’s “common legislative agenda.”

He cited the majority bloc’s previous agreement to make the agenda “progressive,” including taxation.

“Pero huwag kami dapat maghati-hati sa substance ng aming common legislative agenda of the majority. Kapag doon kami nagkahati-hati, it is time to rethink why we are together,” said Pimentel, who was supported by 20 senators including the 5 LP-allied colleagues, for Senate President.

(But we should not be divided on the substance of the common legislative agenda of the majority. If we are divided on that, it is time to rethink why we are together.)

For the LP, however, there is nothing wrong with their actions, especially with bloc voting. Drilon said it has long been a practice in the chamber.

“Is it against the democratic rule that we vote as a bloc? That is practice in this legislative body and we are exercising our prerogatives as members of the body,” Drilon said in an interview.

Asked if the party will stick it out with the majority, Drilon only said: “Unless the majority decides otherwise.”

Senator Leila de Lima said it is inappropriate for a senator to make an issue out of it, as she claimed it is a form of “oppression.”

“Bakit pangungunahan ng member na yan kami? Hindi pa nga kami nag-uusap on that matter. (Why is he getting ahead of us? Our party has not even talked about the matter.) So it’s inappropriate. To me, that’s tending towards oppression. Respetuhin naman natin ang isa’t isa (Let us respect each other),” De Lima told reporters.

“No one can impose on our will, both our personal and collective will. No one is supposed to dictate on us on matters like that,” she added.

De Lima said it just so happens that the 5 LP-allied senators have the same views on most issues in the chamber.

The 5 LP-allied senators have voted as a bloc against the hero’s burial of the late dictator Ferdinand Marcos and the removal of De Lima as justice chair, among others. – Rappler.com