Bishop vs death penalty: ‘God did not cast the first stone!’

Jan 21, 2017 8:49 PM PHT
Paterno Esmaquel II
Facebook Twitter Copy URL
Copied
'Even if anyone has a sinful or scandalous past, remember, that person can still be redeemed and renew his life,' Balanga Bishop Ruperto Santos says 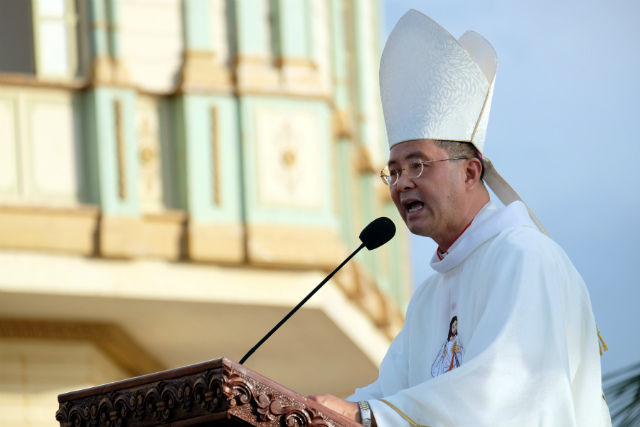 MANILA, Philippines – Balanga Bishop Ruperto Santos denounced the death penalty as he recounted the story of the adulterous woman saved by Jesus from being stoned to death.

“Those who brought the woman to Jesus were after her summary execution – extrajudicial,” Santos said on Friday, January 20, the last day of the World Apostolic Congress on Mercy (WACOM) in Bagac, Bataan.

Referring to the woman’s accusers, he continued: “They presented her to Jesus not out of fraternal charity or correction. It was not to save her, not to rescue her from a sinful past or a sinful life. They wanted her to be punished…to die a very violent death.”

“Jesus was silent,” Santos said, “because he was ashamed of the attitudes of his people.”

“Jesus could not understand nor accept why his very own people were happy and demanding the death of this helpless woman,” the bishop explained.

Santos made these remarks as President Duterte pushes for a death penalty law to boost his war on drugs, which other bishops also tackled in WACOM. (READ: Bishop on killings: Filipinos ‘quiet like in time of Hitler’)

The war on drugs has killed more than 6,700 people in less than 7 months, even without the capital punishment.

In his homily on Friday, Santos urged Catholics to remember how Jesus dealt with the adulterous woman. The biblical story recounted Jesus telling the woman’s accusers, “Let the one among you who is without sin be the first to throw a stone at her.”

“And we will remember,” Santos said,” that there was a time, even more than once in our lives, at the hour of a violent death, or in the danger of incurable disease, or at the moment of impending shame or disaster, God did not cast the first stone!”

“And instead, God delivered us from evil, gave us our daily bread, and turned our water into wine,” the bishop added.

Describing the value of mercy, Santos also said, “It is to sustain life, not to make it suffer. It is to prolong life and not to suppress it. It is to maintain life and not to murder it. Remember, mercy is life.”

“Even if anyone has a sinful or scandalous past, remember, that person can still be redeemed and renew his life. Even if he is the worst sinner, he can still be sorry and correct his life. There is hope,” he said.

WACOM is a 5-day gathering of up to 5,000 devotees of the Divine Mercy, which the Philippines hosted this year.

Other issues raised in WACOM included the proliferation of fake news and online trolls, which Santos said do not show mercy.  – Rappler.com