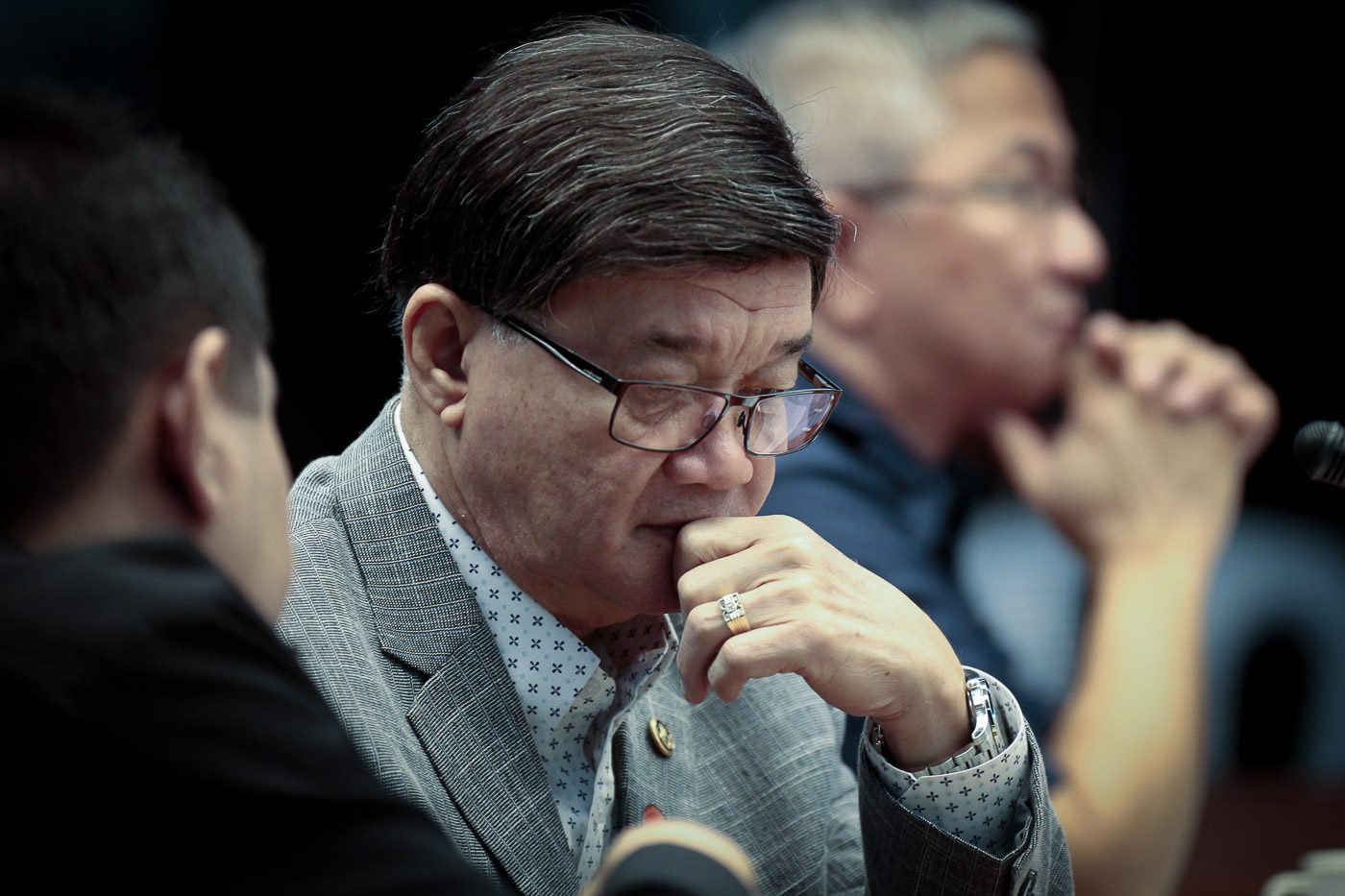 Facebook Twitter Copy URL
Copied
The 1st hearing on the bribery scam in the Bureau of Immigration leaves more questions than answers, as senators try to uncover the extent of the involvement of the justice secretary

MANILA. Philippines – The Senate blue ribbon committee on Monday, January 23, held a 4-hour probe into the bribery scandal involving the Bureau of Immigration (BI), but it left lawmakers and observers with more questions than answers.

At the center of the controversy are gambling tycoon Jack Lam, as well as Justice Secretary Vitaliano Aguirre II and his two ex-deputies: former BI associate commissioners Michael Robles and Al Argosino.

The 3 public officials attended Monday’s hearing, where they repeated their earlier claim about attempts by Lam, who’s abroad, to bribe them in exchange for the release of Chinese nationals that he had illegally employed in his casino at Clark in Pampanga.

The first hearing failed to shed light on the inconsistencies that marked the officials’ previous media statements. The senators reached only one consensus: that bribery indeed happened.

“The jury’s out yet,” said Senator Richard Gordon, committee chairperson. He said he will call them to one or 2 more hearings.

Aguirre, Argosino, and Robles are all fraternity brothers of President Rodrigo Duterte in the San Beda-based Lex Talionis fraternity.

Argosino and Robles stand accused of receiving P50 million from Lam. Aguirre, on the other hand, had admitted meeting with Lam in a hotel.

Aguirre is the top boss of the BI officials, as the bureau is an attached agency of the Department of Justice. But at Monday’s hearing, he failed to provide clear answers and explanations on the circumstances surrounding his meeting with Lam.

In fact, he left earlier than everyone else to attend a Cabinet meeting in Malacañang, leaving senators with little or no chance at all to grill him.

Here are some questions waiting to be answered by the justice secretary.

Aguirre admitted meeting the controversial Chinese gambling tycoon Jack Lam in a private hotel room in Taguig City on November 26, 2016, or 2 days after 1,316 Chinese were caught illegally working in his casino in Pampanga.

Lam was with two interpreters and his alleged associate, former Senior Superintendent Wally Sombero – who has served as resource person at the DOJ on small town lottery (STL).

Aguirre was with Argosino, who initially had a scheduled meeting with Lam at 3 pm that day. Argosino, upon learning that Aguirre and Lam were to meet at 5 pm, asked to join it instead.

In that meeting, Aguirre said he was offered “bribe” money through Sombero.

“It’s very clear that he wants to impress me that Jack Lam is very rich and he could give me whatever I want by way of bribe. I rejected it. Before 15 minutes, I went out of the room,” Aguirre told the committee.

“He told me, ‘Puwede ba ang secretary of justice ang mag-ninong kay Jack Lam (Can the Secretary of Justice be the godfather of Jack Lam)?’ So I rejected it, I started going to the door so that I could go to the 4th floor where the awarding ceremony of the San Beda College of Law will take place,” he said.

Senators Antonio Trillanes IV and Leila de Lima – two of the fiercest critics of the President – found this meeting improper, given that it involved a justice secretary and someone with a pending case in his agency.

(It appears that there are many questions on the possible involvement of Secretary Aguirre. First of all, he would find it difficult to explain why he met with those who violated the law.)

(The Chinese nationals were already arrested and there was already a case. You already had them arrested because of certain violations of immigration laws, including overstaying and working without visa. The Secretary of Justice or any official of the DOJ and BI should not be talking with those who already have pending cases.)

It was unclear why Aguirre chose to meet with Lam given the circumstances. Aguirre only said the hotel was the same venue of the San Beda College of Law’s awarding ceremony, which he was also scheduled to attend.

Gordon saw nothing improper in what Aguirre did. The senator said the venue was “public,” even if Aguirre admitted the meeting took place in a private room in the hotel.

“So far no [propriety issue]. Maraming tao eh (There are many people there). In a public place. Ang hirit sa kanya nahihirapan na ang mga tao – walang comfort room. Puwedeng pakiusapan siya dun (He was asked to meet about the status of the detainees, the absence of a comfort room. They could appeal to him),” Gordon said, referring to the situation of the Chinese detainees.

(If they were really bent on addressing the situation of the 1,316 Chinese nationals, they should have met in the BI, not in a hotel.)

Despite the ‘bribe,’ why didn’t Aguirre file charges vs Lam, Sombero?

Aguirre himself has repeatedly said he was offered “bribe” money by Lam through Sombero. He also said in previous interviews that he would have received at least P50 million to P100 million monthly, considering the high profit from online gambling.

Yet, it’s unclear from the hearing why the justice secretary failed to file a case against Lam.

Senators failed to ask Aguirre this question before he left.

But in an earlier interview, Aguirre said there was no “concrete evidence” of bribery. “It’s very hard nga. You cannot prosecute if only on the basis of that. Mahirap (It’s difficult). Perception ko lang ‘yun eh (That’s just my perception). Before you can be accused, there must be an overt act of bribery. Patikim pa lang ‘yun, hindi pa maaaring overt ‘yun (That is just a sample, it could not be counted as an overt act),” Aguirre said in December 2016.

Article 212 of the Revised Penal Code prohibits the corruption of public officials by penalizing any person “who shall have made the offers or promises or given the gifts or presents” to a government official.

Aguirre has also contradicted himself on the supposed bribe offer.

In one part of the hearing, he echoed his previous press statements, saying Sombero made him feel that “Lam could give me whatever I want, by way of bribe.”

But less than an hour later, he told senators it was only the media that “interpreted” it to be bribery. No less than President Rodrigo Duterte acted on Aguirre’s earlier bribery claim by ordering Lam immediately arrested. (READ: Duterte orders arrest of gaming tycoon Jack Lam)

Argosino said that Aguirre, upon leaving the hotel room on November 26, directed him to oversee the meeting with Sombero.

For senators, Aguirre should answer why he gave the alleged order. After all, that meeting, which extended until past 5 am the following day, prompted the initial P50-million payout to the 2 BI officials from Lam through Sombero.

Argosino said he and Robles accepted the money as part of “evidence” against Lam, but senators questioned why they kept the funds at home from November 26 until December 13.

Trillanes said he sees Aguirre’s involvement in the bribery scandal.

But Gordon came to Aguirre’s defense.

(Aguirre should explain the conflicting statement of Argosino that he allegedly told the latter that he should take care of the matter. But I did not hear it from Aguirre, only from Argosino.)

(There are no accusations here, although the one questioning is throwing an accusation. If Aguirre indeed told Argosino to take care of the meeting, that’s a loaded statement. But it’s Argosino talking, not Aguirre.)

The committee is set to resume its hearing on February 7.

Trillanes would be conducting his own committee probe, though a date has not been set. He earlier accused Gordon and another Duterte ally, Senator Juan Miguel Zubiri, of whitewashing the investigation, after they initially moved to strip Trillanes of power to lead the inquiry. This prompted a heated word war between Trillanes and Zubiri, where they almost came to blows. – Rappler.com