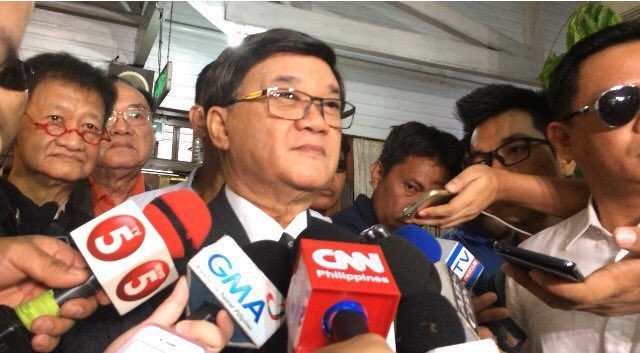 MANILA, Philippines – Justice Secretary Vitaliano Aguirre II said on Thursday, January 26, that former president Benigno Aquino III still has a lot of explaining to do over his alleged liability in the Mamasapano clash in January 2015 that killed 67 people, including 44 elite cops from the Special Action Force (SAF).

Aguirre said Aquino should submit his mobile phone for investigation, claiming texts and calls on the eve of the clash could prove that he was ultimately the most accountable for the botched police operation.

Aguirre said Aquino should have made sure that then SAF director Getulio Napeñas would follow his order and coordinate with the Armed Forces of the Philippines (AFP) ahead of the operations.

(Napeñas did not violate anything, it was (Aquino’s) shortcoming. When Napeñas told him that the military was compromised and that coordination should only be on a time-on-target-basis, Aquino should have said “No, no, I insist that you coordinate.” He was silent, and what does silence mean? Silence means acquiescence.)

Aquino released a statement on Thursday morning saying his only fault was that he trusted Napeñas to never lie to him. Aquino said Napeñas gave him the affirmative answer when he told the police director to coordinate with the military ahead of the operations. On the contrary, Napeñas only gave the military the heads up on a “time on target” basis, meaning when the operations were already underway. (READ: Noynoy Aquino tells Duterte: Mamasapano not my fault)

(I trusted a two-star police officer whom I personally promoted. I believed that this PMA graduate will follow the school’s values of courage, integrity, loyalty.)

President Rodrigo Duterte has ordered the creation of a truth commission to reinvestigate the Mamasapano clash. And while Aguirre said he doesn’t have details of the commission yet, he said it will likely address unanswered questions in the past investigations into the incident.

The Philippine National Police-Board of Inquiry and a Senate investigation earlier said Aquino was responsible for the operation, but the Ombudsman’s special panel of prosecutors initially cleared the former president of criminal liability. Ombudsman Conchita Carpio-Morales said separate complaints against Aquino over the Mamasapano clash are still undergoing preliminary investigation.

(There are so many questions left unanswered that’s why there is no closure yet despite there being a Senate investigation. Why wasn’t the artillery suppport used at 8 or 9 in the morning of January 25, when all the conditions to use it were already set? Secondly, what was the role of OPAPP, of Ging Deles and her husband? Did they stop the use of artillery?)