Duterte rejects Dela Rosa’s resignation: What good will it do?

Jan 30, 2017 2:20 AM PHT
Pia Ranada
Facebook Twitter Copy URL
Copied
'If there are still scalawags and criminals inside Crame, they will continue with or without Bato,' says the President, describing 'many' cops as 'corrupt to the core' 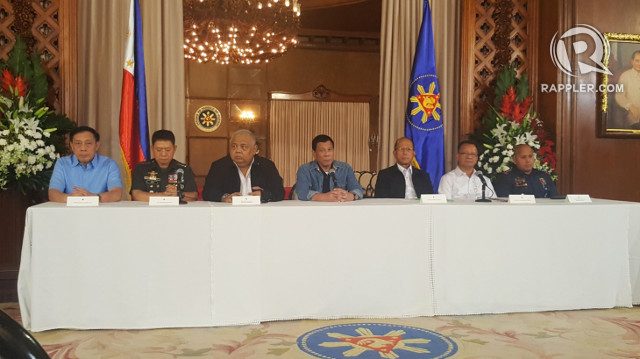 “Bato offered to resign yesterday. But I declined his retirement because it would not contribute anything,” said Duterte during a late-night press conference on Sunday.

“It (Jee Ick Joo’s murder) is an injustice, but to ask for the head of the PNP chief, there’s no rhyme or reason for that. Even if you say chain of command,” he added.

Dela Rosa had tendered his resignation over the murder of South Korean businessman Jee Ick Joo, which happened right inside Camp Crame, the headquarters of the PNP.

The PNP chief, present at the same press conference, said he had offered to resign “to give the President a free hand to choose somebody who can replace me and do the job as expected.”

Previously, Dela Rosa made a verbal offer to resign. This was formalized during the joint command conference of the military and police that preceded the press conference.

“What good will it do the police to remove Bato? If there are still scalawags and criminals inside Crame, they will continue with or without Bato,” said the President.

“You are corrupt to the core,” he added, slamming the police force.

Duterte also said he owes part of his success as Davao City mayor to former regional directors like Dela Rosa.

“I could not have succeeded in Davao kung wala akong suporta nila (if I didn’t have their support),” he said.

The two officials, the most prominent figures leading the government’s drug war, assured the public they would strive to keep the anti-drug campaign free from abusive cops.

“I expect them to fight crime, including policemen involved in crime,” said Duterte.

Dela Rosa, meanwhile, said: “I will do my job to the best of my ability. I hope I will not fail the President.”

Duterte declared on Sunday that the war on drugs would last until the end of his term in 2022. He initially vowed to suppress the drug problem in his first 3 to 6 months, then later sought a 6-month extension. – Rappler.com