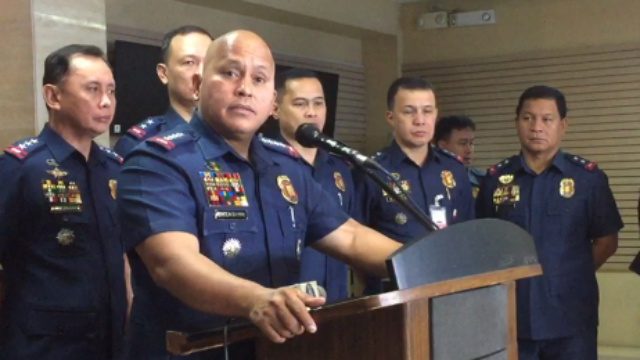 MANILA, Philippines – A team of roughly 100 “decent” cops will be operating against “scalawags” and “syndicates” among their own ranks, said Philippine National Police (PNP) chief Ronald dela Rosa on Monday, January 30, amid criticism over cops linked to crimes themselves.

The Counter Intel Task Force is the latest in the PNP’s “internal cleansing” efforts. Also on Monday, Dela Rosa ordered the 160,000-strong PNP to stop all anti-drug operations, effectively marking their exit from President Rodrigo Duterte’s popular but controversial war on drugs.

“We have to focus our efforts towards internal cleansing. And by the time that we cleanse the PNP, the President will determine that and he will instruct us to go back [to] the war on drugs. But right now, no more drug operations,” Dela Rosa said before newly-promoted police officials in Camp Crame.

Hours before, Duterte announced the dissolution of all Anti-Illegal Drugs Group (AIDG) units – from the national to the local levels – after it was revealed that AIDG personnel were involved in the abduction and murder of South Korean businessman Jee Ick Joo.

Jee was abducted from his Angeles City home in October 2016 and killed inside Camp Crame, the PNP headquarters, on the same day. The case has sparked outrage both here and abroad, even prompting some government officials to call for Dela Rosa’s resignation.

More than 7,000 deaths have been linked to the war on drugs, most of them labeled “deaths under investigation” by police – suspected summary killings with possible links to illegal drugs.

Police have also boasted of more than a million “surrendered” drug personalities thanks to Oplan TokHang, their flagship “knock and plead” operation against suspected users and pushers.

But since the war on drugs began in July 2016, the PNP has repeatedly found itself on the defensive against allegations of abuse by its own men and women.

Dela Rosa has repeatedly defended police from allegations of abuse and wrongdoing.

On Monday, the PNP chief admitted he was wrong. “We were doing well. We presumed regularity in the performance of duties of our personnel. But we can no longer presume that… after the Korean was killed,” he said.

Dela Rosa said the Counter Intel Task Force will be led by a senior superintendent.

“We must be careful because this unit will police the police. If someone corrupt is placed there, we’ll be infiltrated by police with their own agendas and it will all [go] to waste… we’ll make sure this leader is beyond questions, beyond doubts. He needs to be clean and brave enough to face bad cops head-on,” said Dela Rosa.

The PNP already has several mechanisms to guard against erring cops, among them the Internal Affairs Service (IAS), which has the power to investigate cases even without complainants.

The Criminal Investigation and Detection Group (CIDG), in several instances, has investigated and filed cases against fellow policemen as well.

Dela Rosa happened to be part of the counter-intel unit when he was with the Intelligence Group. – Rappler.com