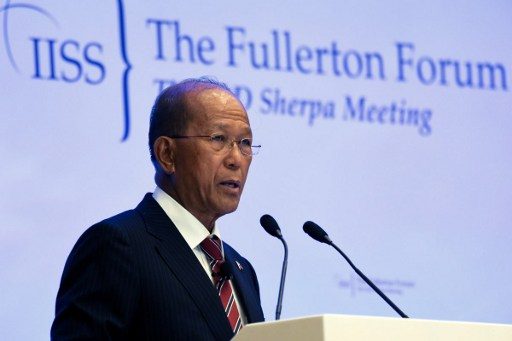 “The Department of National Defense has requested the Office of the Executive Secretary to issue an official order regarding this presidential directive to serve as a legal basis for our troops to follow,” Lorenzana said in a short statement on Wednesday, February 1.

Duterte ordered “internal cleansing” in the Philippine National Police after some of its officers were implicated in the gruesome murder of South Korean businessman Jee Ick Joo inside Camp Crame, the police headquarters.

Duterte admitted that the incident “embarrassed” him, and that he believed that 40% of the police are “used to corruption.”

Below is the short statement issued by Lorenzana on Wednesday. But National Security Adviser Hermogenes Esperon Jr argued it’s possible for a unit of the Armed Forces of the Philippines to be “deputized” by the Philippine Drug Enforcement Agency (PDEA) to support anti-drug operations.

“They can arrest if they are part of operations, and if they are deputized by PDEA then why not?” Esperon said in a chance interview.

But Esperon said this is likely to involve only a specific unit of the AFP, not the force as a whole.

He also said the creation of a unit within the military to deal with the drug problem was discussed during the joint command conference last Sunday, January 29.

On Tuesday, January 31, Malcañang said Duterte floated the idea of reviving the Philippine Constabulary, a law enforcement arm that will be composed of military personnel.

The revived PC is envisioned to take charge of the drug war at the national level, while the PNP will enforce it at the local level. – with reports from Pia Ranada/Rappler.com