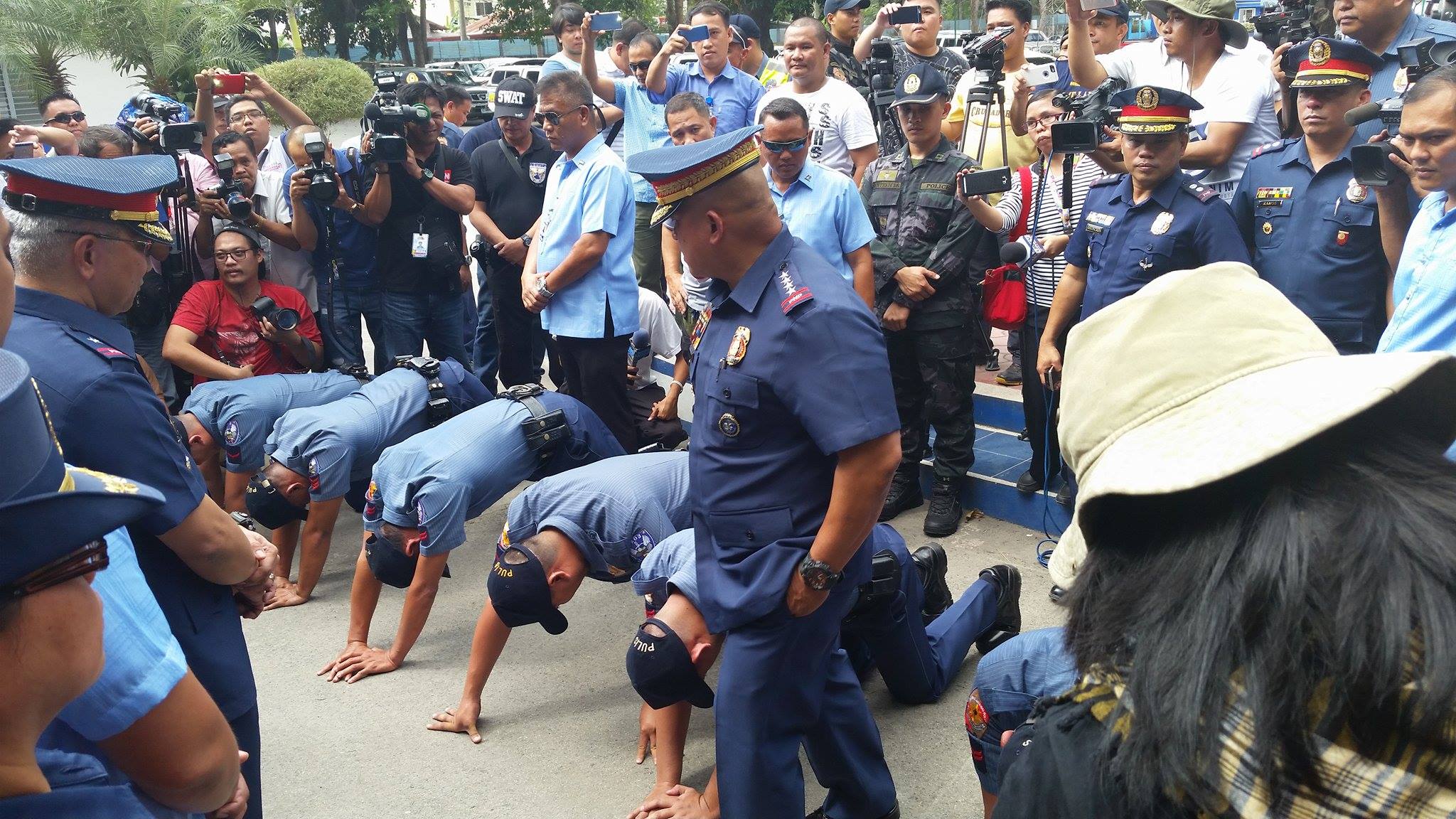 But besides a mere reprimand, the national police chief was unable to control himself and repeatedly hurled invectives at the cop-suspects. Still unsatisfied, he punished them with a difficult push-up type position while continuing to reproach them.

“Bakit ninyo pinera? Bakit ninyo binugbog?” he asked the 7 policemen lined up in front of him, referring to the Korean victims. (Why did you extort from them? Why did you manhandle them?)

Dela Rosa was referring to the “arrest” of Korean tourists Lee Ki Hun, Min Hoon Park, and Lee Jun Hyung from their friend’s house along Apo Street in Friendship Plaza Subdivision here last December 30 in what the suspects claimed was a police operation against illegal online gambling.

The subdivision is the same posh housing area where Korean businessman Jee Ick Joo was kidnapped by a group of men led by policemen from the now defunct PNP-Anti Illegal Drugs Group and later murdered inside the PNP national headquarters in Camp Crame.

When Dela Rosa got replies from the 7 suspects that they thought that what they were doing was a legitimate operation against online gambling, he became angrier.

(Is it legitimate to extort during an operation? Is it legitimate to manhandle people? How many Koreans did you treat that way? If another Korean comes out to complain against you, you sons of bitches! Let’s see how good you are.)

He then asked why they victimized the Koreans. Every suspect again told him that they thought it was a legitimate police operation.

(Is it standard procedure to arrest Koreans, manhandle them and extort money from them? Is that legitimate? What kind of training did these people get? Do you know I’d like to put you before a firing squad? You sons of bitches.)

He then turned to the officials of the Angeles City police, asking them what they did to make their men become such policemen.

(Who is the intel here? How many years have you been intel here? Six months? You didn’t catch what your people here have been doing. What did you do? You let it be? Or maybe you were accepting money they were earning?)

Dela Rosa then ordered the suspects to assume front-leaning position, a push-up like stance where one hand is placed atop the other, while he continued hurling invectives at them.

Problem for the President

While the suspects were in front-leaning position, Dela Rosa asked a police official about the status of their case.

He was told that kidnapping for ransom and robbery were already filed against the 7 Station 5 policemen.

(Shame on you. What you did caused a problem for the President. It’s good if this was a problem just for your director. It reached the top because you were victimizing a foreigner.)

Dela Rosa again turned to the city police officials and told them that if another policeman is involved in a crime against Koreans, they will be made to perform the same physical punishment.

After the 7 suspects were brought inside the police building, he asked the commissioned officers to line up in front of him and he lectured them on what it is to be a law enforcer and how to supervise their men.

(You did not do anything. You’ve been seeing the bad your people have been doing and you let them be.)

Police sources here said Villacorte was with Dela Rosa when the PNP chief arrived Wednesday morning. By late afternoon, Villacorte was already holding a command conference with the police station commanders and division heads and other units in this city. – Rappler.com