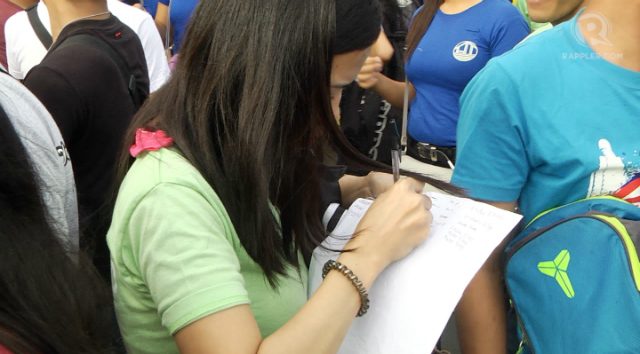 CAVITE, Philippines (UPDATED) – Twenty workers of the House Technology Industries (HTI) remained unaccounted for as of Thursday night, February 2, a full day after a fire hit the factory at the Cavite Export Processing Zone.

This was based on the company’s inventory of employees who were able to clock out shortly before the fire broke at 6:15 pm on Wednesday, February 1, said Cavite Governor Jesus Crispin Remulla.

As for the initial list of 7 missing workers, as reported by relatives, the governor said only two and then one had not surfaced Thursday afternoon.

In the morning, of Thursday, starting at 8 am, thousands of HTI workers showed up for the attendance check that the company conducted. Employees were asked to gather at the facility’s Gate 5 – as the fire continued to rage in the factory some two kilometers away – so supervisors would know who had gotten out safe the night before.

According to Remulla, there were between 4,000 to 6,000 workers in the facility when the fire broke at 6:15 pm – they had just changed shifts.

There were 104 people brought to nearby hospitals for treatment, 4 of whom are in critical condition, although a hospital owner earlier said 20. (READ: LIST: Workers injured in Cavite export processing zone fire)

Michael delos Santos, a production operator at HTI, shared that workers were asked to sign a piece of paper that serves as their attendance for the day to confirm their safety. They were later sent home. He said that the firm will issue a statement when they can return to work.

Remulla, in a press conference, said: “Definitely, there are missing people, according to those who were inside. But we need to validate it with a ground survey.”

The governor said that authorities cannot verify the total number of affected people as they can only inspect the facility an hour after the fire is put out.

“We cannot enter until it’s a total fire out. There might still be ember and it might spark fire again,” he said.

The fire, which broke at 6:15 pm Wednesday, was declared under control by 11:30 pm, but is not completely put out as of Thursday evening.

The HTI facility, where housing materials for export to Japan are manufactured, occupies 6 hectares in the Cavite Export Processing Zone. It is the biggest employer in the processing zone, about 15,000 employees.

The labor and social welfare departments, as well as the provincial government, have pledged assistance to the victims. Companies within export zones are under the authority of the Philippine Economic Zone Authority, not the local governments. – Rappler.com