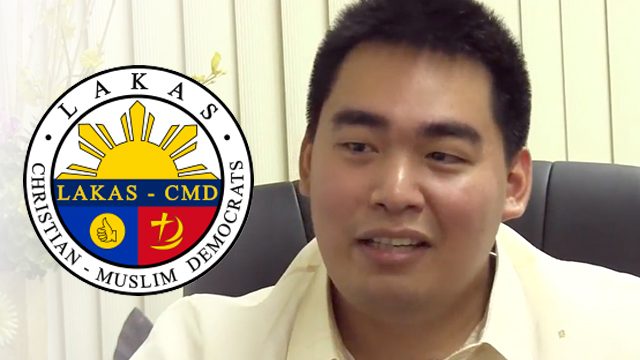 XJ Romualdo confirmed this with Rappler on Thursday, February 2.

“Yes, I joined and took oath as member of Lakas yesterday in the office of Deputy Speaker Gloria Arroyo,” said XJ Romualdo in a phone interview.

The lawmaker said he and his father, former Camiguin Governor Jurdin Jesus Romualdo, had been discussing his change in political alliances for quite some time.

“It was more of like a sentimental decision because of my grandfather. He was a longtime member of Lakas, but it was my dad who had convinced him to join NPC (Nationalist People’s Coalition),” said Romualdo.

Romualdo is the grandson of the late former Camiguin Representative Pedro Romualdo. The family patriarch was running for re-election during the May 2013 polls, but he passed away in April 2013 due to pneumonia.

His grandson substituted for him and became one of the youngest lawmakers elected into Congress at 26 years old. XJ Romualdo, an Ateneo Law School graduate, was also among the topnotchers of the 2012 Philippine Bar examination.

Prior to joining NPC, Pedro Romualdo was a longtime member of Lakas-CMD and was a known staunch supporter of Arroyo when she was still president.

XJ Romualdo said he has spoken to leaders of the LP before leaving the party.

“They understood naman. It was about me growing as a politician,” said XJ Romualdo.

The LP had been a thriving party when its member Benigno Aquino III was still president. Most of its members jumped ship to Partido Demokratiko Pilipino-Lakas ng Bayan (PDP-Laban), however, after Rodrigo Duterte won the 2016 polls. (READ: The Liberal Party and realpolitik in the House)

With XJ Romualdo’s departure, LP now only has 32 members in the House, 27 of whom have signed a coalition agreement with PDP-Laban to join the majority.

The remaining LP lawmakers are part of the independent minority bloc, who tag themselves as the “genuine” House opposition. – Rappler.com