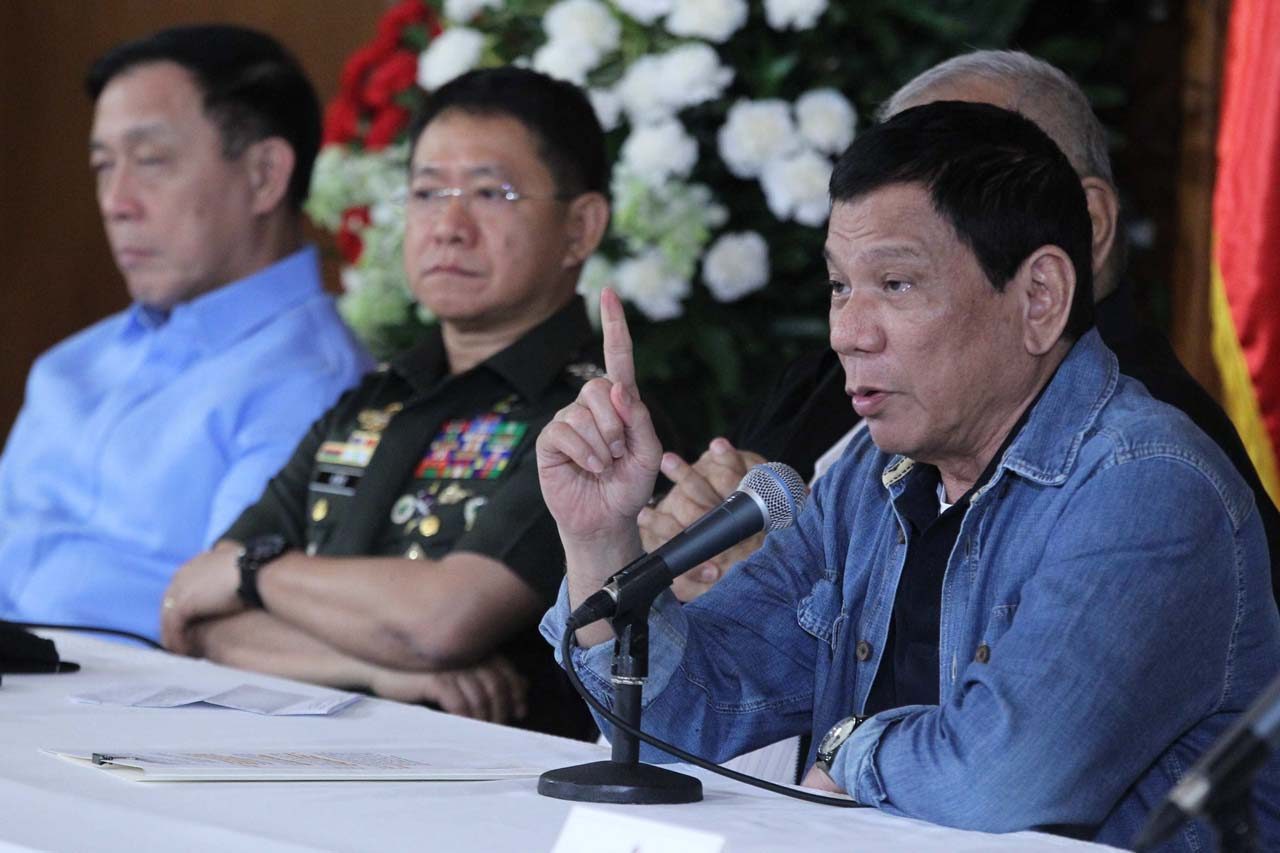 Facebook Twitter Copy URL
Copied
'Go back to your camps, clean your rifles, and be ready to fight,' Duterte orders soldiers, lifting the ceasefire he declared during his first State of the Nation Address

“Kagabi (Last night), I decided to lift ceasefire tonight. Wala nang ceasefire (No more ceasefire),” said Duterte on Friday, February 3. The decision goes against the advice of his peace panel.

He made the announcement two days after the NPA announced its ceasefire would be lifted on February 10. (READ: NPA ends ceasefire but says talks should continue)

Unlike the NPA’s ceasefire withdrawal, the government’s will take effect immediately.

(I don’t want killings, but if my soldiers are dying, let’s resume anytime.)

Addressing the military, he said: “I lost so many soldiers in 48 hours, to continue the ceasefire, we will not produce anything…Go back to your camps, clean your rifles, and be ready to fight.”

Duterte, who called himself a leftwing president, expressed pessimism that his administration would achieve peace with communists.

“I would really like to express my sadness. We cannot have a peaceful generation. There will always be a fight,” he said.

But he emphasized that he had “walked the extra mile” for peace but that, in the end, he felt he was at the “losing end of the bargain.”

“Let it not be said that I did not try,” he added.

Specifically, he pointed out how releasing the 400 political prisoners, as demanded by the Communist Party of the Philippines, would be “conceding too much.”

“I really tried but the demands are really too huge, that it’s really impossible to meet or even work out a ompromise,” said the President.

Rappler earlier learned that Duterte had given orders terminating the ceasefire on Thursday night, February 2, while he was in Davao City.

He had given instructions to Armed Forces of the Philippines chief of staff General Eduardo Año to “lift the ceasefire immediately,” according to a Palace official.

Rappler earlier obtained a text message sent to military commanders Thursday night about the plan of the President to lift the ceasefire. “PRRD (President Rodrigo Roa Duterte) will lift the ceasefire tonite. CSAFP (Chief of staff, AFP) instruction is to consolidate all BTA/forces and go on offensive ASAP.” BTA refers to Bayanihan Team Activities that are conducted by soldiers in communities for their “people-centered” projects but which the NPA describes as counter-insurgency operations.

The President announced his decision on the day he is to visit the wake of a soldier killed during an encounter with NPA rebels.

Armed clashes between the military and the NPA have occurred in the past two weeks, with the 2 armed groups accusing each other of committing ceasefire abuses and claiming they were only forced to fight back.

The first firefight to break the 5-month-old ceasefire happened in Makilala, North Cotabato, where an NPA rebel was killed in government operation against supposed “extortionists.” It happened while talks were ongoing in Rome. (READ: Soldiers, NPA break ceasefire in North Cotabato)

A week later, beginning on Sunday, the military claimed coordinated attacks from the NPA. At least 6 soldiers were killed including a junior Army officer belonging to the Philippine Military Academy Class of 2016.

Armed Forces spokesperson Brigadier General Restituto Padilla claimed the NPA used excessive force against 3 soldiers in Bukidnon, citing a report from the police that a total of 76 bullets were used to kill them.

The NPA said it also took 5 soldiers as “prisoners of war” (POWs). – With reports from Carmela Fonbuena/Rappler.com