Feb 7, 2017 7:30 AM PHT
Jee Y. Geronimo
Facebook Twitter Copy URL
Copied
'I wanted to close and I wanted to suspend, and they wanted to fine. You'll just fine? I mean the rivers are red, they're in a watershed, and you'll just fine?' says Environment Secretary Gina Lopez 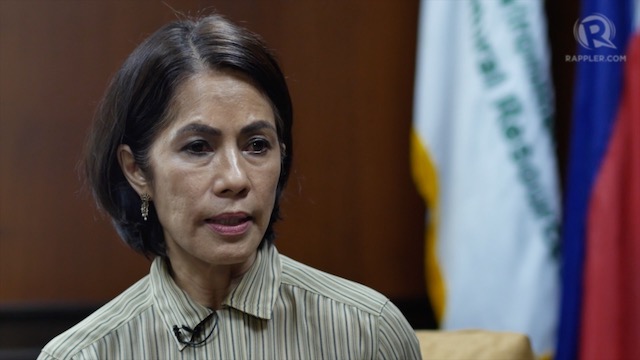 MANILA, Philippines – Environment Secretary Gina Lopez said she “didn’t agree at all” with the recommendation of the team in charge of the mining audit to just impose fines on mining companies that committed environmental violations.

“They themselves say that there are violations. Where we differed was the action taken. I wanted to close and I wanted to suspend, and they wanted to fine. You’ll just fine? I mean the rivers are red, they’re in a watershed, and you’ll just fine? What are you doing?” she said during a Rappler Talk interview on Monday, February 6.

Lopez was referring to the multi-sectoral team she convened to “go around” the mining sites and “speed up the process” of the mining audit that started in July 2016.

On February 2, or 7 months since the start of the audit, Lopez announced the closure of 23 mining operations in the country and the suspension of 5 others. Only 12 mining firms passed the audit.

During that press conference, reporters asked Lopez if they could get a copy of the recommendations of the Mines and Geosciences Bureau (MGB) on the mining operations, but she refused, saying that the MGB is only “recommendatory” and that showing their recommendations would only “complicate things.”

The Chamber of Mines of the Philippines later questioned the fairness of the mining audit, but on Monday, Lopez said they followed the procedure “from beginning to end.” (READ: Confusion over the mining list: How did DENR decide on closure?)

“There was absolute transparency. We did the mining audit and then after the mining audit, we gave them show cause – that’s the procedure. And then they replied to the show cause, and… at the end of the reply, we then decide on whether the mine should be closed or suspended or allowed to go on.”

But Lopez lamented that her own team took longer than expected in going around the mining operations.

“It was like 6 months already, and they had only checked out 15 [mining operations], and I was getting irritated already because even the President says he wants things fast, so I just decided to go in it myself,” she explained.

Lopez said the team’s findings validated her own findings on the environmental violations, but she didn’t agree that the mining companies should only be fined.

“We agreed on the violations, they also saw that there were violations, but their penalties were just fines, and I didn’t agree at all, so that’s why I decided, ‘I’m not gonna follow you,'” she said.

Concerned mining companies can still appeal the DENR decision with the Office of the President. – Rappler.com