Feb 7, 2017 7:37 PM PHT
Carmela Fonbuena
Facebook Twitter Copy URL
Copied
Senator Richard Gordon says only 10 out of the 24 senators are in favor of the measure that President Rodrigo Duterte has asked Congress to pass 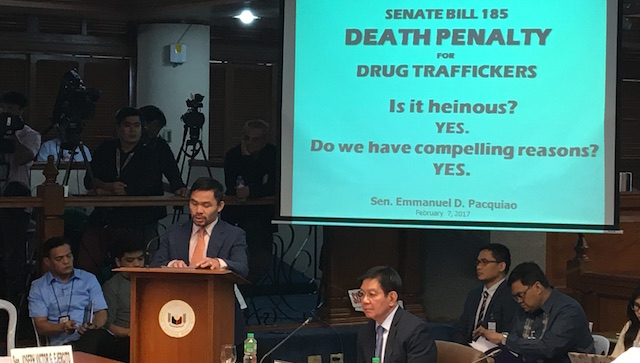 MANILA, Philippines – Senators opposed to the reimposition of the death penalty showed up in fighting form at the continuation of commitee hearings on Tuesday, February 7, outmaneuvering the measure’s key proponent Senator Emmanuel “Manny” Pacquiao.

By the estimates of Senator Richard Gordon, only 10 out of the 24 senators are in favor of the measure that President Rodrigo Duterte asked Congress to pass. He did not name them. (READ: Duterte asks lawmakers to revive death penalty)

The chairman of the committee on justice and human rights that is hearing the proposals maintained he has been refereeing the hearings objectively.

Majority Leader Senator Vicente Sotto III, among those who filed bills to reinstitute the death penalty, admitted its chances of passing in the Senate is “50-50.” (READ: Unlike in House, chances of death penalty bill in Senate still unclear)

Sotto said they scheduled a hearing as a commitment to the House of Representatives to tackle the measure, but clarified that the leadership made no commitment the upper chamber will be able to pass the measure.

“We cannot assure the passage but we have assured them that we will take it up,” said Sotto.

Bills need to be approved both by the Senate and the House of Representatives before they can become law. The House started plenary deliberations last week, but it’s not a priority measure in the Senate.

But Sotto said he hopes to change the mind of other senators with an amendment he formally introduced to his bill during the hearing – limit death penalty only to “high-level drug trafficking and manufacturing” and exclude crimes like rape with murder, for example.

The amendment is meant to dismiss criticisms that the death penalty is anti-poor. Data from the Free Legal Assistance Group (FLAG) presented during the hearing shows 70% of convicts lined up for death in 2004 – before the death penalty was lifted – had incomes less than P10,000.

Sotto said his amendment may be the only way that the measure could pass in the Senate, citing failed attempts in the past to revive it.

The critics of the measure raised several other arguments against it, however.

Senator Franklin Drilon won the argument for those opposing the death penalty during Tuesday’s hearing. He successfully deferred the hearing after he pounced on a government lawyer who was forced to admit that the revival of capital punishment is illegal under an international treaty that the Philippines ratified in 2007.

A visibly peeved Pacquiao could not do anything despite a panel of resource speakers – mostly from government agencies – predominantly in favor of the death penalty.

The hearing was adjourned without a scheduled resumption.

Gordon said it’s a welcome victory but admitted it is temporary because he anticipates the government would bounce back after it comes up with ways to opt out of the treaty.

Government divided on death penalty, too

The Senate hearing showed government agencies are divided on Duterte’s pet measure, too.

The critics include the Department of Social Welfare and Development and the Philippine Commission on Women.

The government officials were asked to state their positions at the start of the hearing.

Supporters of the death penalty mainly argued that it is a supposed effective deterrent to crime.

The police maintained that the Philippine experience on the death penalty cannot be used an example, however.

“When death penalty was reimposed in 1998, there were only 7 executions conducted. I’m not saying this is too little but it was not given an opportunity to be enforced…to see if it is [a] deterrent or not,” said a PNP official.

But it’s an argument dismissed by critics who cited data showing that the death penalty has proven to have “failed in deterring crimes” even in other countries.

Amnesty International (AI)|, an international organization that was also represented in the hearing, argued that the reimposition of the death penalty could affect the country’s position when it asks foreign countries to commute sentences of Filipinos who are given the death penalty abroad.

AI said it is opposed to the death penalty “for any and all cases”, arguing that it is a violation of human rights, particularly the right to human life. – Rappler.com