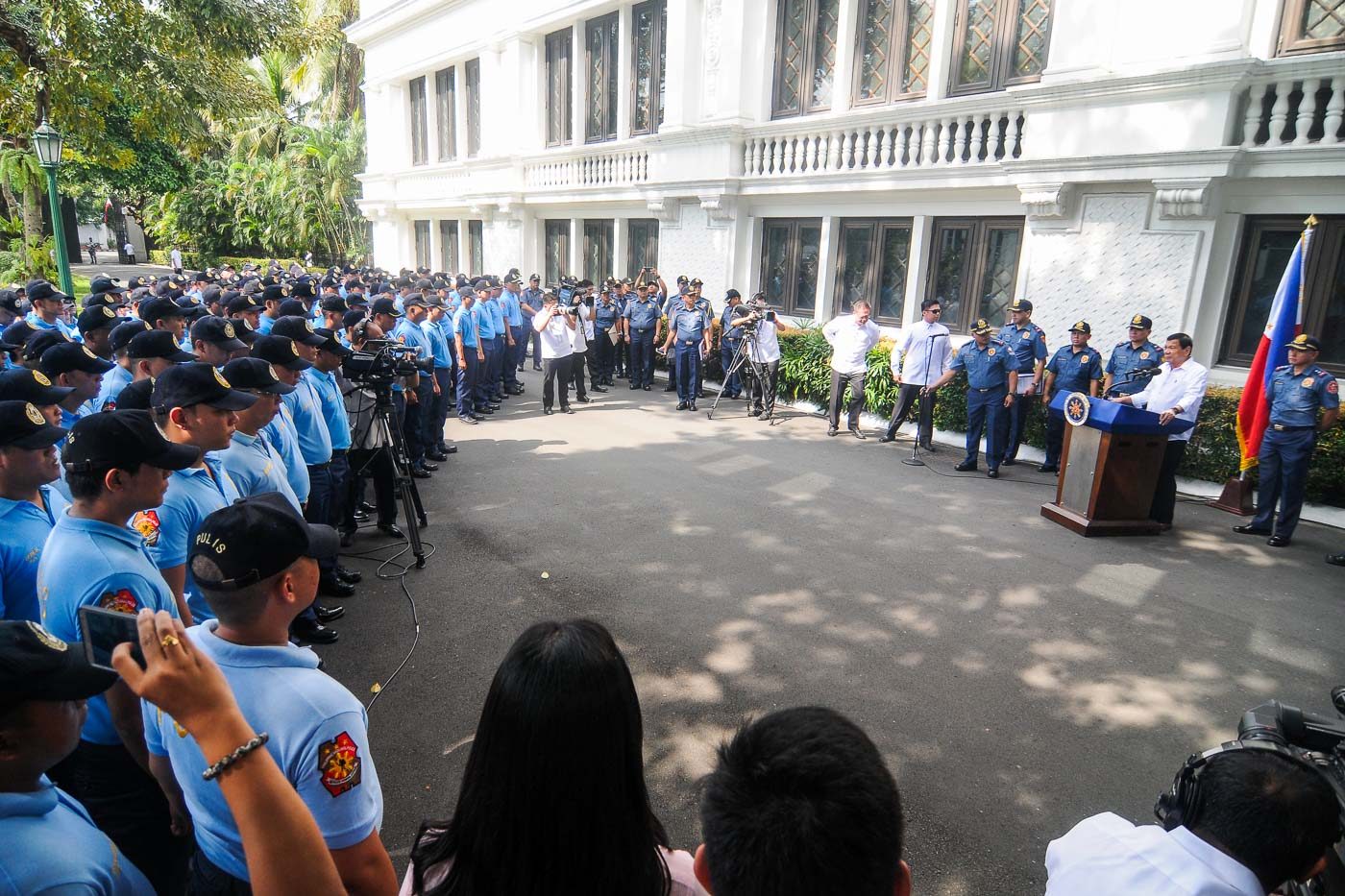 Facing over 200 policemen mostly accused of minor offenses, some charged with extortion and robbery, Duterte said they should get ready for deployment to Mindanao conflict areas in 15 days – his punishment for their alleged crimes.

“Prepare to move out. I’ll give you two weeks from now, 15 days,” Duterte said at a podium set up in front of the main Palace building, addressing the policemen lined up before him.

(I need police in the south. I lack police in Basilan because their stations are always being bombed. All of you here, you are part of Task Force South, I will send you to Basilan. Live there for two years.)

Police who refuse to be deployed to those areas will have to tender their resignation to their superior officer, the Chief Executive said.

Duterte said he would also dismiss some of them but he would create a “battalion” composed of military personnel to watch their every move. He said this is necessary because, in his experience, police who are dismissed use their skills and contacts to commit crimes.

“I will create a battalion to keep track of your movements,” he said.

The President did not ask the police to clean the Pasig River that day, but told them to return in swimming trunks.

(Come back here, wear swimming trunks. Clean the Pasig River. Drink its water because it’s dirty. You sons of bitches.)

“Hindi na ako mag retraining, anong training ko sa inyo? (I won’t retrain you anymore, what will I train you to do?)” said Duterte.

‘I will kill you’

Throughout the President’s curse-laden speech, the police kept their heads down and remained silent.

Duterte’s speech lasted for only 13 minutes – short compared to his usual 40-minute to one-hour speeches – but one that rang clear with threats.

(Most policemen, especially those who were dismissed, they are part of syndicates because they know many things. You are the most dangerous among criminals. You know your way around. Son of a bitch, I will really kill you in front of the Philippines.)

It would be the corrupt cops’ turn to become victims of extrajudicial killings, Duterte warned.

(You get into drugs, son of a – sorry, but I won’t think twice. You will be the victim of extrajudicial killing, it’s true.)

Duterte was told that most of the police presented to him that day were those charged with only “minor” offenses like being late for duty or failing to report for duty, said Chief Inspector Kimberly Molitas.

PNP chief Dela Rosa, in an interview with reporters before Duterte’s speech, admitted that a “majority” of the police were there for minor infractions.

But he said some are facing cases of extortion, robbery, and drug-related offenses.

Before the President’s speech, Dela Rosa admitted feeling shame for the policemen.

“If they are embarrassed, I am even more embarrassed because I am their chief. If my personnel are bad eggs, it means I am also a bad egg,” he said in Filipino. – Rappler.com