Duterte to meet with Leftist Cabinet officials on peace talks

Feb 8, 2017 6:36 PM PHT
Patty Pasion
Facebook Twitter Copy URL
Copied
NAPC lead convenor Liza Maza says the fact that President Rodrigo Duterte has called for a meeting with them next week shows that 'there is always room for optimism' as far as the peace talks are concerned 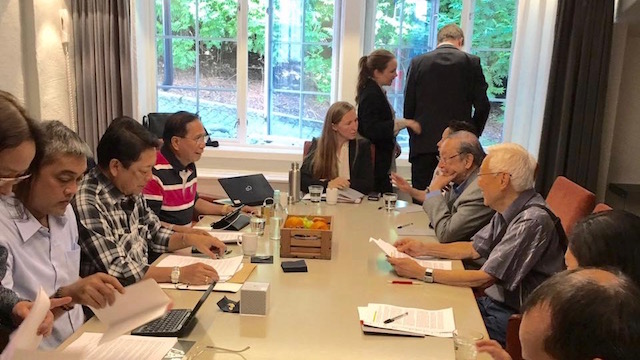 MANILA, Philippines – Leftist Cabinet officials are hopeful the peace negotiations between the government and communist rebels will resume, as President Rodrigo Duterte has called for a meeting with them on the issue next week.

Maza said Labor Secretary Silvestre Bello III, chief government negotiator in peace talks with the National Democratic Front (NDF), will join the meeting, which will be held sometime next week.

“I think the fact that he (Duterte) said we will talk about it, there is always room for optimism. Like I said, never say die. I think our role there is, the President knows our position on the peace talks, is for it to continue to give voice to our countrymen who are hoping for peace,” Maza said before attending the housing summit at the National Housing Authority.

Mariano, Maza, and Taguiwalo earlier issued a statement urging the government and NDF to pursue the negotiations. They see the current talks as the most productive one compared to previous administrations, especially in terms of setting common ground on the Comprehensive Agreement on Social and Economic Reforms (CASER). (READ: Leftist Cabinet members: Continue peace talks for benefit of the poor)

Duterte terminated the peace talks with the NDF on Saturday, February 4, after he lifted the government’s ceasefire with communist rebels. This followed the announcement of the New People’s Army (NPA), the armed wing of the Communist Party of the Philippines (CPP), that it was canceling its ceasefire with the government.

The President has also terminated the Joint Agreement on Safety and Immunity Guarantees (JASIG), supposedly paving the way for the arrest of NDF consultants who were temporarily released from government detention to participate in the peace talks.

Despite the scathing remarks of Duterte, who branded communist rebels as “terrorists” and “spoiled brats,” Maza said the Leftist Cabinet officials continue to have a good working relationship with the President.

“As of now, the responsibilities vested upon us as heads of agencies and as Cabinet members, we continue to fulfill. In the final analysis, it is the President’s call, his political decision if we will stay or not,” said Maza. – Rappler.com