Lagman on death penalty bill: Vengeance is not justice 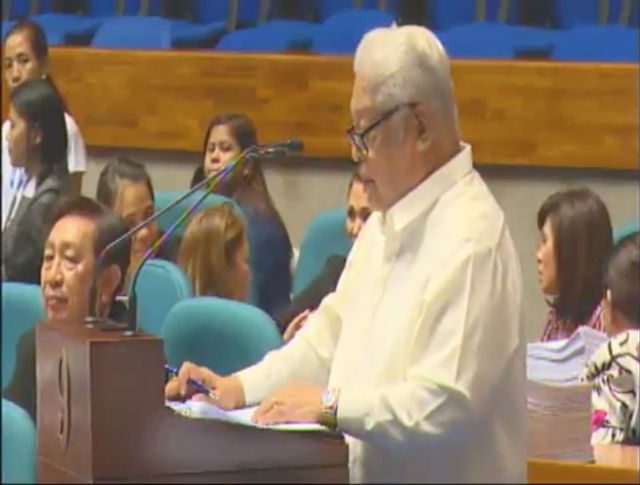 MANILA, Philippines – The debate on the controversial death penalty bill reached the House of Representatives’ plenary session on Wednesday, February 8.

Lagman first delivered a 30-minute speech, where he listed 15 main arguments why the 17th Congress should not reimpose the death penalty for 21 heinous crimes. (READ: How lawmakers will argue vs death penalty bill)

The opposition lawmaker argued against the sponsors’ claims that the death penalty will solve the rising number of vigilante-style killings in the country. (READ: IN NUMBERS: The Philippines’ ‘war on drugs’)

“The death penalty exacerbates the culture of violence and its revival adds state-sanctioned killings to the unabated extrajudicial killings related to the deadly campaign against the drug menace,” argued Lagman.

“It would be good to keep in mind a Chinese proverb which reminds us that he who seeks vengeance must dig two graves – one for his enemy and one for himself. Because justice is not vengeance and vengeance is not justice,” he added.

Both Umali and Veloso said Filipinos are forced to bring justice to victims with their own hands because the current criminal justice system is flawed. For the two, returning the capital punishment would show the public the government is serious about punishing the perpetrators of heinous crimes.

According to Lagman, the death penalty will not solve criminality.

“Solving the incidence of crime is a multi-dimensional process which ranges from sustained poverty alleviation to much-needed police, prosecutorial, and judicial reforms. The severest penalty is not the antidote to criminality,” he said.

Lagman then proceeded to interpellate Umali. Lagman asked the House justice panel chair to justify HB 4727 by citing the latest data on the supposed rising incidence rate of each of the 21 heinous crimes listed in the bill.

Umali, however, could not give any updated data to Lagman, who then moved to terminate the debate since the sponsor could not provide the necessary information.

He was turned down by Deputy Majority Leader Juan Pablo Bondoc, who said: “The need for data by a single member does not preclude us from debating the measure at hand. So that forces us to oppose the motion of the honorable Lagman.”

Del Mar also hit the bill’s sponsors for failing to provide concrete compelling reasons as to why the 21 crimes tagged as heinous under HB 4727 should be meted with the death penalty. (READ: Congressmen’s compromise: No mandatory penalty of death in bill)

“There must be a compelling reason justifying the imposition of each and every crime enumerated, not a general, collective compelling reason which refers to the death penalty but does not refer to any of the crimes which are enumerated and categorized as heinous [under the bill],” he added.

In its current form, HB 4727 only lists down the crimes that would be punished by the death penalty, but the measure fails to justify why. – Rappler.com