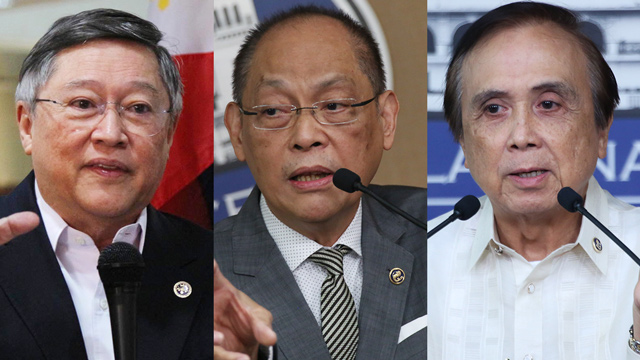 Instead they are pushing for fully funding the Unified Student Financial Assistance System for Tertiary Education (UniFAST) as an alternative to the proposed legislations on a tuition-free policy in SUCs.

“The proposed free-tuition policy will benefit largely the non-poor students who predominate in SUCs,” a National Economic and Development Authority statement cited the 3 Cabinet officials as saying.

They added, “In 2014, only 12% of the students attending SUCs belong to the bottom 20% of the family income classification based on the Annual Poverty Indicators Survey.”

According to these economic managers, an across-the-board tuition-free policy has possible adverse implications, such as the exodus of students from private higher education institutions (HEIs) to SUCs.

Such an exodus, they said, would eventually affect the overall quality of Filipino graduates given that “a number of private HEIs perform better than SUCs.” (READ: Free tuition in state colleges: When CHED officials clash)

They also maintained that the budgetary support for free tuition will be difficult to sustain. (READ: Higher budget, free tuition in state colleges: Easier said than done)

According to them, if the national average tuition fee of SUCs under the Students Grants-in-Aid Program for Poverty Alleviation (SGP-PA) is P20,000 per annum, a total of P28 billion in government funds will be needed to support a tuition-free policy for the estimated 1.4 million students currently enrolled in SUCs.

In addition, the economic managers pointed out that tuition does not constitute the biggest share of college education cost in the country.

For instance, under the SGP-PA grant structure, tuition is only one-third or P20,000 of the annual cost of P60,000 per student covered by the grant. The rest is for living expenses (P35,000) and instructional materials (P5,000).

Should government shoulder the tuition of all SUCs’ students, the economic managers said poor families would still be unable to pay for their children’s living expenses and instructional materials, which would then prevent these students from going to college.

For them, fully funding UniFAST has other advantages over the tuition-free policy, including a “a clear delineation among its 3 modes of financial assistance” in terms of:

“The government should implement its mandate of promoting quality and accessible education within the limits of fiscal prudence, and with the use of appropriate tools and targeting mechanism,” the economic managers said.

A number of bills in Congress seek to institutionalize the tuition-free policy, which has been given an P8.3-billion funding under the 2017 budget.

President Rodrigo Duterte however placed the fund under conditional implementation, as he wants to make sure that “financially disadvantaged but academically able students” are prioritized.