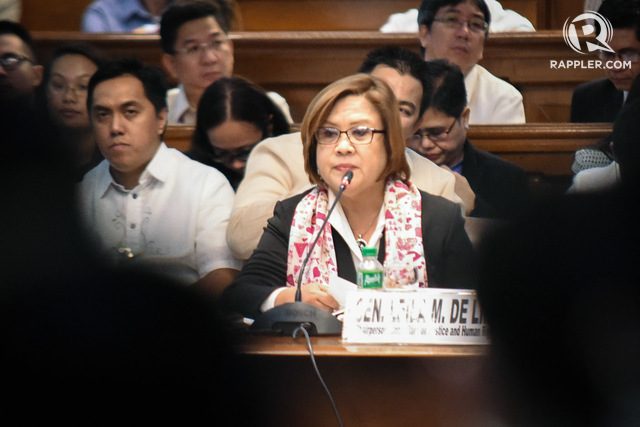 Facebook Twitter Copy URL
Copied
'I've been preparing for the worst-case scenario,' says Senator Leila de Lima ahead of a supposed arrest warrant against her

MANILA, Philippines – Senator Leila de Lima said on Monday, February 13, that she is preparing for the “worst,” amid an impending release of an arrest warrant against her.

De Lima said it has always been the goal of President Rodrigo Duterte to put her in jail. She also cited Justice Secretary Vitaliano Aguirre II’s repeated public pronouncements about her likely arrest.

“I’ve been preparing for the worst-case scenario. Isa po iyan sa matagal nang inuutos ng Pangulo (It has been one of the orders of the President). ‘Di ho ba ilang beses na niya ‘yan sinasabi (Isn’t that what he has been repeatedly saying), he wants me locked up in jail to suffer the fate of former president Gloria Macapagal-Arroyo,” De Lima said in an interview.

“Those are his words, not mine. So matagal na po akong pina-project ng mga ‘yan (So Duterte and his allies have long been plotting against me),” she added.

The senator was then justice secretary when she stopped Arroyo from leaving the country on the basis of plunder charges against the former president. Arroyo, now representative of Pampanga’s 2nd District, is a key ally of Duterte.

Last week, Aguirre said the arrest order against De Lima would be out “anytime” soon in connection with her alleged links to illegal drugs.

“She knows that anytime, lalabas na ang warrant of arrest (the arrest warrant against her would be served),” Aguirre earlier said.

No less than President Duterte, as early as September 2016, said that his fiercest critic would surely go to jail. Duterte was the first to accuse the senator of protecting drug lords, after she questioned the spate of extrajudicial killings under his administration.

The Department of Justice (DOJ), according to De Lima, plans to file the cases against her before regular courts to expedite the release of the warrant.

But she argued this is not the proper way, as the Ombudsman has the sole jurisdiction over public officials like her.

(Well, I really don’t know when the arrest warrant would be issued. But Aguirre is confirming that the DOJ resolution would be released very, very soon. He also has statements that, ‘She better brace herself for an arrest.’ That means the information I got would indeed happen. Instead of bringing the resolution to the Ombudsman, which has jurisdiction over me, they would go straight to regular courts to secure an arrest warrant.)

De Lima’s allies in the Liberal Party (LP) questioned the impending warrant, saying the release of an arrest order without “credible evidence and witness” is illegal. LP senators also said Muntinlupa inmates were only threatened to testify against De Lima.

De Lima is facing 5 complaints before the DOJ. The first 4, filed by the Volunteers Against Crime and Corruption, the National Bureau of Investigation, former NBI deputy directors Reynaldo Esmeralda and Ruel Lasala, and inmate Jaybee Sebastian, were consolidated by the DOJ and submitted for resolution last December 21.

She is also facing charges of indirect bribery and violation of the anti-graft law. – Rappler.com