Feb 14, 2017 9:00 AM PHT
Patty Pasion
Facebook Twitter Copy URL
Copied
(UPDATED) A grandson of the author of the 'Conjugal Dictatorship' calls on the youth to fight historical revisionism 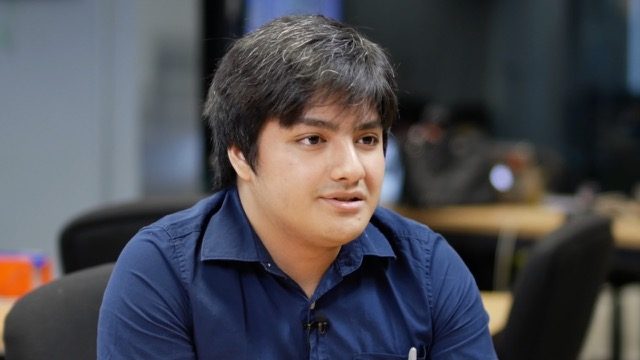 MANILA, Philippines (UPDATED) – Months have passed since former president Ferdinand Marcos was buried at the Heroes’ Cemetery, but the opposition against it remains – especially among the younger generation.

At age 19, JC Mijares Gurango is taking the challenge of preserving the hard truths of the Philippines’ dark chapter that have left Filipinos stuck in polarizing debates.

Gurango is the grandson of Primitivo Mijares, media czar of the late strongman. As president of the National Press Club and chairman of the Media Advisory Council during the Marcos regime, Mijares had served as the dictator’s top propagandist while the government controlled the press.

He, however, turned his back against Marcos in 1975 and exposed the scandals of the regime before a congressional committee in the United States. He wrote the book, Conjugal Dictatorship, which details his insider account of the Marcoses.

A year after the book was published in 1976, Mijares tried to return to the Philippines but he went missing. He was never found.

Gurango never met his grandfather to personally hear the stories of Martial Law. But he knows he has to do something to not only preserve his sacrfice and legacy but also history. (READ: 2016: The year the Marcoses had it so good)

He worked on to republish his grandfather’s book and will relaunch it on February 21 – in time for the 31st anniversary of the 1986 EDSA People Power Revolution that ousted Marcos. (READ: ‘Conjugal Dictatorship’ to be relaunched in time for EDSA anniversary)

“Most of the people who are alive at the time are starting to die. Most of the people who can attest to the story, to what happened are slowly dying and I feel if we don’t have something like this we’re just gonna succumb to the whitewashing of the Marcoses of our history,” he said in a Rappler Talk interview on Monday, February 13.

Connecting with the youth

He believes it is now the task of his generation to fight the rewriting of history, an issue that surfaced when Marcos was granted a state burial in November last year. (READ: Diokno: Next anti-Marcos campaign is to educate the youth)

“As future influencers, future voters, future teachers… [we need] to make sure that the story is told in a truthful way, accurate way,” he said, still hopeful that there are many young people interested to read about Martial Law.

The new edition of the book contains 200 pages of annotation to aid young readers with the context of the events that his grandfather mentioned in his accounts.

What he wants other young people to appreciate about the book are the anecdotes about the Marcoses that show their character, which can only be told by a trusted man of the former president.

“This really tells the story [not only] from a perspective of the people [who are alive at the time] but from the perspective of [an] insider who was able to understand Ferdinand’s mind,” he shared. “One thing about my grandfather is Ferdinand trusted him enough to allow him inside his personal chambers.”

Gurango hopes other books such as his grandfather’s may be reprinted to be resource materials in schools.

Meanwhile, history professor Jo Ed Tirol of the Ateneo de Manila University has crafted a Martial Law curriculum that will be recommended to the Department of Education.

Education Secretary Leonor Brioners earlier committed to deepen the discussion of Martial Law in schools and to review the textbooks.

“It is important that this (historical revisionism) becomes not a war of resources (money and influence) but a war of knowledge,” said Gurango. – Rappler.com