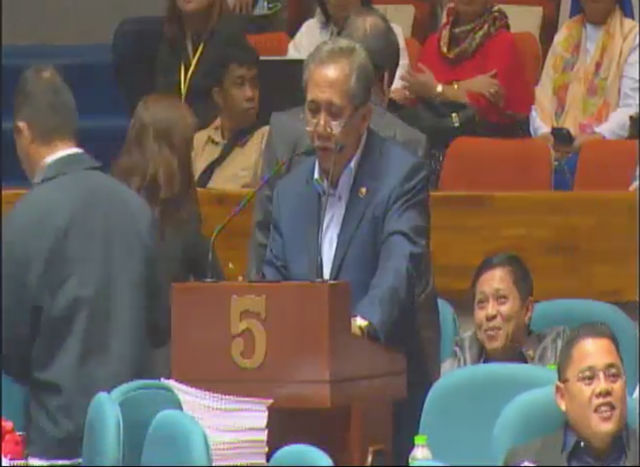 The House of Representatives continued the debate on House Bill (HB) Number 4727 on Tuesday, February 14.

Rocamora first explained that the current justice system is incapable of properly handling the return of the death penalty. (READ: A lethal mix? Death penalty and a ‘flawed, corrupt’ justice system)

He cited the 2004 ruling on People v Mateo, where the Supreme Court (SC) admitted that 71.77% of death penalty verdicts handed by lower courts were wrong.

“Death is the ultimate form of penalty and should not be resorted to when there is another option… When the Constitution requires compelling reason to impose death penalty, it means it is compelling as there is no other recourse to address the issue. But we now see that reengineering our judicial system is indeed an option,” he said.

Rocamora then asked Veloso to cite the specific compelling reasons that can prove that the crimes happening now should be considered heinous. (READ: An eye for an eye: Can the death penalty bring justice to victims?)

The 1987 Constitution allows Congress to revive the death penalty as long as it finds “compelling reasons involving heinous crimes.”

Veloso cited the abduction-slay of Spanish-Filipino actress Maggie dela Riva in 1967 by Jaime Jose, Basilio Pineda Jr, Edgardo Aquino, and Rogelio Canal. All her tormentors were found guilty by the court, with Jose, Pineda, and Aquino executed through the electric chair in 1972.

But Rocamora was not buying it, saying the recent crimes Veloso mentioned may just have been sensationalized by the media and may not accurately picture the current state of crime in the country.

“Is it not possible these crimes have been there all along, except that for the modern media right now, they are being sensationalized  and made known to the public?” asked Rocamora.

“You should remember that sporadic, sensational crimes do not constitute compelling reason. They are once in a blue moon crimes that happened [at] random,” he added.

On Tuesday, Veloso countered the arguments of anti-death penalty lawmakers that imposing the death penalty will be against the poor since they do not have access to competent lawyers.

Veloso explained that the criminal justice system is fashioned in such a way that an accused can appeal his or her case before the CA and the SC should the Regional Trial Court (RTC) judge sentence him or her to death.

The congressman also said lawyers from the Public Attorney’s Office, assigned to the accused who cannot afford their own legal counsel, are competent.

“Believe me, Madame Speaker, when it comes to conviction of death, it becomes a conviction between God and of judge. The moment the RTC convicts the accused, that is automatically appealable to the Court of Appeals, which has 3 justices in each division. Then these justices will really take a hard look at the facts of the case before they sign a warrant of death,” said Veloso.

“A conviction of death penalty is automatically appealable to the Supreme Court. The Supreme Court has 15 justices. Each and every justice of SC will really take a hard look because an error there will become his error that he has to account with his God,” added the lawmaker.

He said that throughout the whole process, an accused will have “20 lawyers that will take a look at his case.”

Roque focused on the argument that Congress cannot pass HB 4727 since the Philippines is a state party to the Second Optional Protocol to the International Covenant on Civil and Political Rights (ICCPR), which prevents participating countries from reviving capital punishment. (READ: UN on death penalty: PH will break int’l law)

“One of the most fundamental rules in international law is pacta sunt cervanda –international agreements must be performed in good faith. A treaty engagement is not a mere moral obligation but creates a legally binding obligation on the parties,” said Roque.

“A state which has contracted a valid treaty obligation is bound to make in its legislations such modifications as may be necessary to ensure the fulfillment of the obligation,” he added.

Umali, however, believes the 1987 Constitution supersedes the Second Optional Protocol to the ICCPR.

“But then this is not cast in stone because there is also a doctrine that considers a treaty or an international law which forms part of the law of the land no longer obligatory if there is material change in circumstances,” said Umali.

According to him, international principles of law “are to be treated as the same class as the laws enacted by Congress.”

“And therefore, if this is a law, then it can very well be amended by Congress most specially when the Constitution allows Congress to enact a law that will reimpose the death penalty as provided under our Constitution,” reasoned Umali.

Several senators, however, are not keen on supporting the death penalty bill’s passage into law because they believe it is illegal given the Philippines’ obligations under the Second Optional Protocol to the ICCPR. – Rappler.com