DSWD to give P500-pension to 2.8M indigent seniors MANILA, Philippines – Over 2.8 million indigent senior citizens are expected to receive P500 under the social pension program of the Department of Social Welfare and Development (DSWD) this year.

This year, P17.9 billion has been allocated for the Social Pension Program for Indigent Senior Citizens (SPISC) – double the P8.7 billion budget last year. In effect, the DSWD’s target beneficiaries have also increased to 2.8 million from 1.3 million in 2016.

Citizens aged 60 and above who have no pension from private or government institutions, regular income, or support from their families may enroll in the program.

Qualified senior citizens may apply at the Office of the Senior Citizens Affairs (OSCA), the City or Municipal Social Welfare Development Office or a DSWD Regional Office. Applicants or their representatives must bring an OSCA ID and birth certificate, or any document stating his or her date of birth.

The SPISC started in 2011 through Republic Act 9994 or the Expanded Senior Citizens Act of 2010. (READ: FAST FACTS: What benefits are senior citizens entitled to?)

According to a study conducted by the Coalition of Services of the Elderly, HelpAge International and the Confederation of Older Persons Associations of the Philippines, providing a universal social pension could help to lift 3 million Filipinos from poverty.

Using data from the Annual Poverty Indicators Survey (APIS) 2013, the study did a simulation which showed that a P2,000-social pension for senior citizens could reduce poverty levels by 3 percentage points or  equivalent to roughly 3 million poor Filipinos. The current P500-pension, it noted, could only reduce poverty by 1 percentage point. 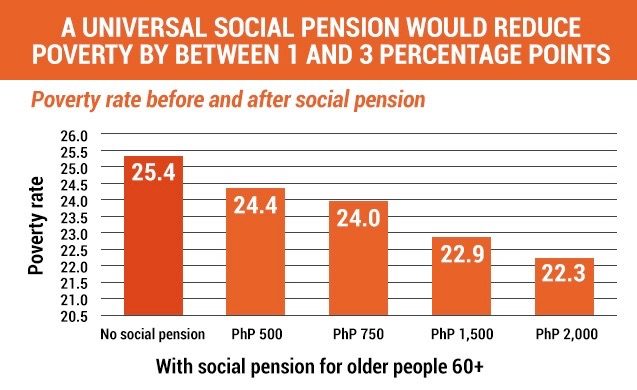 Providing social pension for indigent senior citizens also helps a family to allocate their income to other needs.

“This helps families reallocate expenditure towards other priorities such as children’s education or initiatives to improve household livelihoods. Second, the recipients transfer significant shares of their income with the wider household,” said the study. – Rappler.com