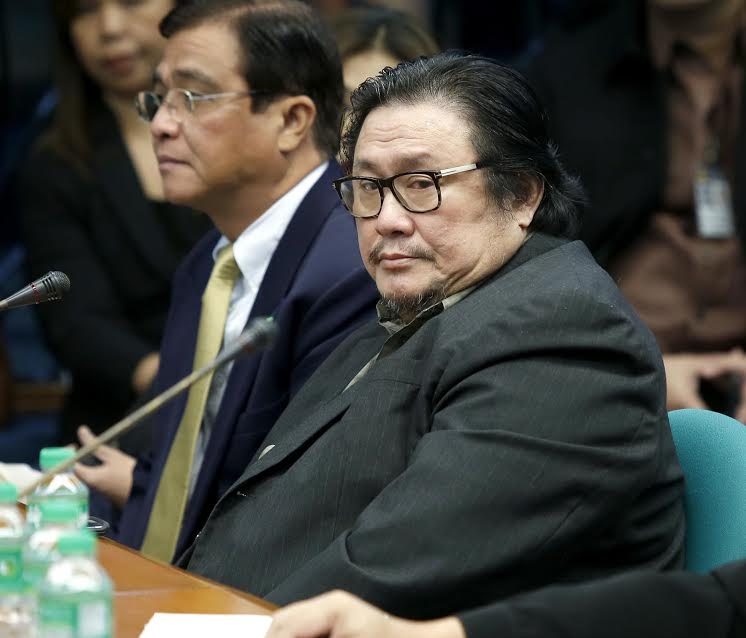 MANILA, Philippines – It was an appearance that many figured would be crucial in a probe into allegations of bribery, extortion, and unscrupulous gambling kingpins and public officials in what many now know as the Jack Lam bribery try.

Towards the end of the hours-long hearing at the Senate session hall, a visibly peeved Senator Richard Gordon, committee chairman, berated Sombero for supposedly repeatedly disrespecting the Senate and its members even after his committee had given the retired cop much leeway. (READ: Macau’s top gambling tycoon: Who is Jack Lam?)

Just how much leeway? In his opening statement, Sombero was allowed to recite a poem – something that might have never happened in a Senate hearing before, Gordon noted in jest.

But that wasn’t the only thing that confused those who witnessed the committee’s fourth hearing on the Bureau of Immigration (BI) corruption scandal  following a crackdown on Chinese illegal workers at Lam’s casino in Pampanga.

Although Sombero is a new character in the ongoing saga at the Senate, his presence certainly didn’t change the overlying theme of the past 3 hearings: finger-pointing, blame games, and conveniently different versions or interpretations of events. (READ: Senate BI bribery probe: 3 hard questions for Aguirre)

Former deputy immigration commissioners Al Argosino and Michael Robles again denied the allegations against them that they extorted money from Lam through Sombero and insisted that there was “attempt” to bribe them in exchange for the release of the illegal workers of Fontana Leisure Parks and Casino.

“There was an intention to bribe. We were there to help them. We were there to discuss things,” insisted Robles. Agrosino, meanwhile, reiterated that they received the money but only as “evidence” of the supposed bribery attempt.

Sombero, however, claimed Argosino asked for P100 million and that the initial P50 million handed to the former officials was merely “goodwill” money. He later tagged the incident as a case of extortion.

Sombrero also admitted that P60 million was allotted for the release of the Chinese nationals, and that he only handed over P50 million to the former immigration officials. He still had the rest of the money, he told the Senate panel.

Over a course of 4 hearings, the blue ribbon committee has established – without any wiggle room for doubt – that there was an exchange of money between Lam through Sombrero and the then-immigration officials.

Justice Secretary Vitaliano Aguirre II was also part of that meeting among Sombrero, Robles, and Argosino. During the meeting, Sombrero asked Aguirre to be Lam’s “ninong (godfather)” – a euphemism for protector.

Aguirre said he declined this offer and left the private hotel room in Taguig City to attend a function a few floors away. Before leaving the meeting, the justice chief told his subordinates, “Ikaw na bahala (It’s up to you).”

Senators again berated the former immigration officials for the time it took them to come clean about the incident, which happened on November 27 but they only turned over the money to authorities on December 13 – after Philippine Daily Inquirer columnist Ramon Tulfo wrote that two immigration officials extorted money from Lam.

As in previous hearings, Aguirre was put on the defensive when asked about the missteps of agencies under his department and his own blunders.

At the February 16 hearing, Senator Risa Hontiveros confronted the justice chief over a “pattern of negligence” leading up to, during, and even after, the BI scandal.

Hontiveros was talking about Aguirre’s decision to meet Sombero, Lam’s middle man, and the fact that Sombero was able to leave the country despite a lookout bulletin order that Aguirre himself issued.

The BI, which is responsible for making sure foreigners working in the country are properly documented and for determining whether a person is cleared to leave the country, is under the DOJ.

Aguirre insisted that he was not negligent. As he had done when confronted with such criticism in the past, Aguirre said he only met Lam because of the bad conditions in the detention facility where the Chinese nationals were detained.

With a tinge of sarcasm, Hontiveros, an Akbayan member, noted that given Aguirre’s busy schedule as justice chief, he should have scheduled the meeting inside his office and within office hours, instead of a hotel.

Again, Aguirre insisted that there was no other motive in his meeting with Sombero.

Gordon, for his part, said Aguirre should have charged Sombero outright. But Aguirre reiterated that at that point, he did not have enough evidence to prove a bribery attempt.

The immigration officer who allowed Sombero to leave the airport on January 17  said the lookout bulletin against Sombero listed “Wally” and not “Wenceslao,” the name that appeared on his passport. Still, senators argued that the immigration officer should have notified the justice department either way, instead of allowing Sombero to leave without any questions asked.

When two public figures constantly at odds with each other share the small space of the Senate session hall, sparks are sure to fly.

In explaining Aguirre why he was not negligent in Sombero’s exit from the country, he compared it to De Lima’s situation. The senator, whom the current administration has accused of involvement in the illegal drugs trade, is also the subject of a lookout bulletin.

The immigration and investigation bureaus – both under Aguiree – were ordered to monitor the “flights, activities, travel and whereabouts” of De Lima and several other individuals.

The exchange was alternately funny, serious, and sarcastic.

De Lima then went on to interject to “correct” Aguirre’s statements.

ILBO, technically and legally, does not serve to prevent the departure. Pero lookout. Kaya lookout kasi kapag nandiyan yung taong subject of the ILBO, irereport ng BI officials or BI personnel to the Secretary of Justice, to the DOJ para kung merong legal impediment for the departure of the subject – let’s say warrant of arrest, o may HDO validly issued by the court, hindi po dapat papayagan. It’s just a notice.

Earlier this week, De Lima said she expected an arrest warrant to be issued against her soon, over her alleged links to illegal drugs. Four days after Aguirre criticized  De Lima’s forecast as “irresponsible,” a DOJ panel filed 3 drug charges against the senator before the Muntinlupa Regional Trial Court.

Also this week, Aguirre was accused of giving preferential treatment to convicts who had earlier testified against De Lima. While Aguirre admitted he allowed airconditioning units to be installed because of the terrible heat, he denied this was VIP treatment as it was for health reasons. (READ: FACT CHECK; Did Aguirre reward inmates who testified vs De Lima?)

Gordon had threatened several times to cite Sombero in contempt for failing to attend the first few hearings. The retired cop was supposedly abroad for  medical reasons.

Gordon did not take Sombero’s remarks lightly. “You are insulting this committee. You try to put form over substance. You come up with half-truths, hairsplitting answers. You better say you’re sorry properly,” he said, berating Lam’s associate.

Several times during the hearing, Gordon reprimanded Sombero for the way he was answering the questions. Other senators could also not help but scold the former cop – directly or passively – for the way he acted and answered.

For good measure, here’s the poem Sombero recited during his opening statement. According to him, it’s an except from the poem, “Ang Liham: Ang Katha ni Popong”:

The Senate panel is set to hold its next hearing on the BI scandal on March 2. – Rappler.com