CBCP head on Walk for Life this Saturday: ‘Huwag matakot’ 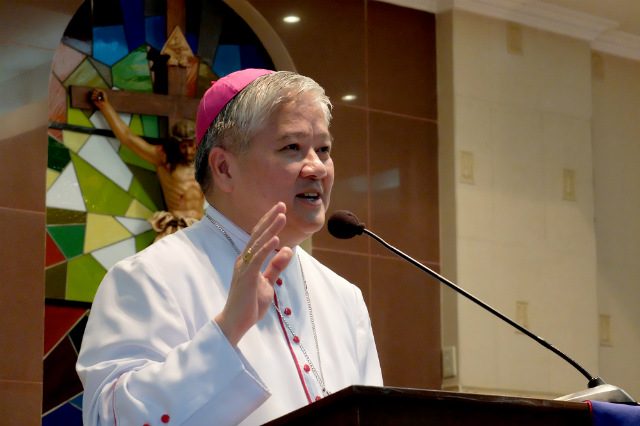 Facebook Twitter Copy URL
Copied
The Walk for Life is set from 4:30 to 8 am on Saturday at the Quirino Grandstand Parade Ground in Manila

MANILA, Philippines – The president of the Catholic Bishops’ Conference of the Philippines (CBCP) challenged Filipinos to stand firm as Catholics hold a huge procession against extrajudicial killings, abortion, and the proposed revival of the death penalty.

“Malapit nang sumikat ang araw. May pag-asa tayo. Huwag matakot sa dilim,” Villegas said in a message set to be delivered early Saturday morning, February 18. (The sun is about to rise. We have hope. Do not be afraid of darkness.)

Villegas also urged Filipinos not to give in to terror, even in the face of death threats. “Huwag mamuhay sa takot,” he said. (Do not live in fear.)

The Walk for Life is set from 4:30 to 8 am on Saturday at the Quirino Grandstand Parade Ground in Manila.

The event was announced as early as January 11, and was organized by the Council of the Laity of the Philippines.

The Walk for Life comes as President Rodrigo Duterte’s war on drugs kills least 7,080 people, while Duterte is also pushing to revive the death penalty.

‘Walk for Life is anti-drugs’

In his message for Saturday, Villegas summarized offenses against life using the first 5 letters of the alphabet: abortion, blasphemy, corruption, drugs, and execution.

On abortion, Villegas said every child is a gift of God.

On blasphemy, he said this is an assault on the name of God, which later translates to a disrespect for God’s creation.

On corruption, he said this practice is killing people, especially the poor.

On drugs, he said illegal substances lead addicts to kill their neighbor. “Ang Walk for Life ay kontra droga,” he said. (Walk for Life is anti-drugs.)

On executions, Villegas said, “We cannot teach that killing is wrong by killing those who kill. It also increases the number of killers.”

Earlier, on February 5, Villegas issued a statement on behalf of the CBCP against the “reign of terror” in poor communities as Duterte wages his war on drugs.